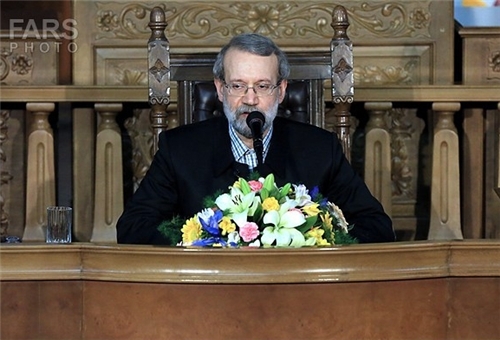 TEHRAN (FNA)- Iranian Parliament Speaker Ali Larijani warned of the western powers’ plots to prevent the development of economic and trade relations among the Muslim states in order not to allow their empowerment and independence from the West.

He also referred to the Western attempts to prevent Islamic countries from gaining power, and said one of its instances is readily seen in their plots against Iran to deprive the country of the nuclear technology despite the fact that they know Iran is just seeking to make a peaceful use of this technology, specially due to the Fatwa (religious decree) of Supreme Leader of the Islamic Revolution Ayatollah Seyed Ali Khamenei against the production and use of nuclear weapons.

Larijani described resistance as the only way for the Muslim states to attain state-of-the-art technologies, and said, “They voice concern about Iran’s missiles but has it been the West which has equipped us with missiles? The answer is no, Iran has stood on its feet and built the missiles by itself.”

On November 24, Iran and the five permanent United Nations Security Council members sealed the six-month Joint Plan of Action to lay the groundwork for the full resolution of the West’s decade-old dispute with Iran over its nuclear energy program.