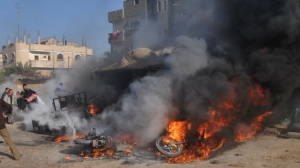 According to Islamic Jihad, the three killed were militant members of the group, identified in Gaza reports as Ismail Abu Judah, 23, Shahir Abu Shanab, 24, and Abd al-Shafi Muammar, 33. Their bodies were taken to the European hospital in Khan Younis. A fourth person was also reportedly moderately wounded.

In a separate event Tuesday morning, a malfunctioning Israel Air Forcedrone crashed in the southern Gaza Strip, prompting an Israel Defense Forces investigation. The IDF Gaza Division decided to ground the Skylark 1 drone system until the investigation is concluded. However, it is still active in other areas such as the Golan Heights.

Palestinians in the Gaza Strip began collecting fragments of the drone. Hamas’ military arm reported that it seized the drone. The Israeli military said the Sky Rider stopped broadcasting images when it crashed, so it is unclear whether the drone’s fragments are of any value. The Gaza Division investigation is meant to ensure whether the crash was caused by a technical failure or a mistake by one of its operators.

Last week, one Palestinian was killed and two others wounded in an Israeli air strike in Gaza. The IDF stated that the target was a group of militants in Beit Hanoun, in the northern Gaza Strip, who were preparing to launch rockets into Israel.