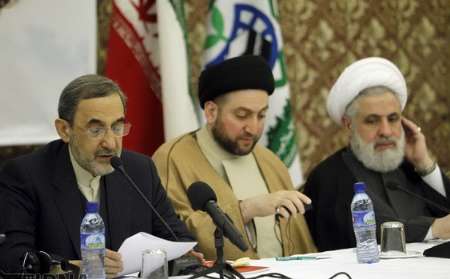 Tehran, March 11, IRNA – Iraqi capital city, Baghdad will be the next host of the Islamic Awakening Supreme Council Meeting, based on a decision made by the fifty guests of that council in their Tehran meeting on Monday.

The participants in the meeting approved of its secretary, Ali-Akbar Velayatiˈs proposals and ratified them by the council in 14 articles.

The 14 important articles approved by the council are as follows:

1. Holding local and regional conferences and gatherings and Tehran general assemblies, as well as Supreme Council sessions in various countries, for instance its next session in Iraq;

3. Sponsoring commemoration and special occasion services and using them as opportunities for elaborating on, and propagating for the foundations of the Islamic Awakening;

4. Broad-scale usage of the printed and audiovisual media;

6. Using the study and research potentials;

8. Holding cultural, religious and training camps, especially for the youth;

9. Using the potentials of the national and regional festivals;

10. Activation and using of the capabilities of the scientific and religious centers;

11. Using the potentials of the non-governmental organizations (NGOs);

13. Using the potentials of the groups that have taken shape thanks to the efforts made by the Islamic Unity Conference, aimed at promoting unity and solidarity within the Islamic world; and finally,

14. Establishment of a strategy for communications and information dissemination between the secretariat and the members of the Supreme Council and the General Assembly.

The abovementioned 14 articles were approved by the participating members of the session as a single bill.

The day-long Islamic Awakening Supreme Council was held in the framework of four committees, in which such issues as pathology and present day status of the Islamic Awakening movement, problems with which the Islamic Ummah (nation) is entangled, the future outlook and exchange of opinions among the representatives of the participating countries in the Supreme Council were surveyed.

Tomorrow and the day after tomorrow (on Tuesday and Wednesday), a two-day gathering titled ˈIslamˈs Role in Geography of World Powerˈ will be held in the presence of the participants at the Islamic Awakening Supreme Council.

The two-day conference will be co-sponsored by the Iranian National Defense University.

The meeting was held under the chairmanship of former Iraqi prime minister, Ibrahim al-Jaˈfari.

The Islamic Awakening movement, which started in 2011 in Tunisia, has swept into several other countries in the Middle East and North Africa including Egypt, Libya and Yemen, although save for Tunisia (and even there its Islamic nature has lost vigor), it has been hijacked either by the remnants of the former regimes, such as in Egypt and in Yemen, or usurped by the western powers and the Zionist regime.