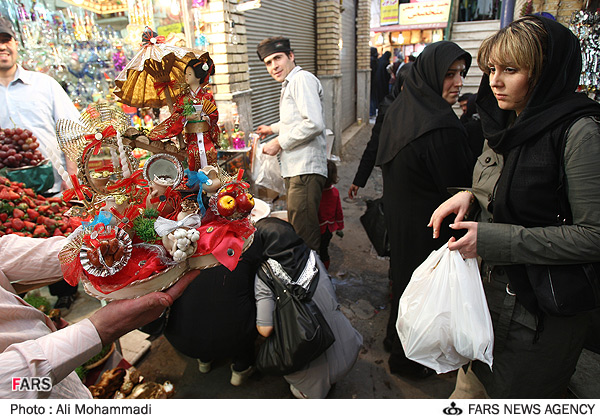 TEHRAN // As the Iranian New Year approaches, residents across Tehran are busy washing their windows, buying fireworks, and sending their handmade rugs for their once-a-year clean.

But amid the bustle of preparation for the two-week holiday, known in Persian as Nowruz, many are fearful of their financial future as they struggle with the country’s deepening economic woes.

What should be a time of hope and renewal to mark the start of spring is overshadowed by worry about making ends meet during a time of economic hardship not felt since the Iran-Iraq war.

High prices for basic products have given the traditional optimism surrounding Nowruz, which falls on March 20, a tinge of anxiety.

“I didn’t buy nuts last year, because prices were very high and I won’t buy them this year either,” said Fahimeh Riazi, 37, a mother of two as she haggled for food for the holiday. “The prices are 30 per cent more expensive compared with two years ago”.

The economic difficulties have been caused by sanctions imposed by the international community over Iran’s controversial nuclear programme. While the election of president Hassan Rouhani may have brought about a less hostile political climate, it is the state of the economy that is the most important issue for Iranians.

Despite the current negotiations between Iran and world powers to reach a final deal on the programme, the national currency, the rial, has lost 50 per cent of its value since 2012, hurting Iranians’ ability to buy basic products.

Iran’s official rate of inflation stands at 37 per cent. But experts in Tehran believe it is much higher perhaps as much as 40 per cent.

Unemployment stands at 10.3 per cent, according to Iran’s National Statistics Center. Yet, the rate of young people out of work is even higher, at 26 per cent.

Supreme leader Ali Khamenei gives each year a name in line with his hopes for the country.

This past year was “the year of political and economic epic,” a reference to Mr Khamenei’s aspirations that Iranians stop suffering from the sanctions.

To offset some of the economic pressure and help families prepare for the New Year, Mr Rouhani’s government organised 400 exhibitions of discounted goods currently taking place throughout the country, with four in Tehran.

The prices of food sold at the exhibitions were lowered with the aim of controlling Iran’s rampant inflation.

Also available was a wide range of domestic products from home appliances and clothing at about 20 per cent less than regular prices, said Ali Fazeli, head of an umbrella group of unions and producers associations which helped organise the 10-day exhibitions in the capital.

For Ms Riazi, who was shopping at one of the exhibitions in central Tehran, the slightly reduced prices were welcome.

“The prices are a bit cheaper than regular shops, not so much, but it is helpful to families,” she said. “I only came to buy new clothes for my children.”

Another casualty of the Islamic Republic’s economic woes is tourism. Many Tehran residents typically spend their two-week holiday on the Caspian Sea coast or at one of Iran’s historic cities such as Shiraz or Isfahan. Affluent Iranians might also spend a few days abroad. But this year most appeared destined to spend the holiday at home.

“My family and I do not have any plans for this Nowruz,” said, Maziyar, 40, a civil engineer from the western part of Tehran. “I prefer to save money by spending our holidays at home, because I do not know how our economic situation will change next year,” he said.

One of the main fears for the upcoming year stems from a recent announcement that some of the cash handouts to millions of Iranians every month will be cut.

The government is ending aid to Iranians who are not considered to need the assistance, in an effort to limit spending in the coming year.

The assistance began under Mr Rouhani’s predecessor, Mahmoud Ahmadinejad, who in 2010 initiated a five-year plan, phasing out energy and food subsidies and replacing them with cash payments to make up for rising costs.

Although the plan aimed to target Iranians in need of aid, all those who enrolled became eligible and approximately 77 million people are now receiving payments, Iran’s vice president Eshagh Jahangiri, said on state TV.

On Sunday, Mr Rouhani asked Iranians who do not need the monthly Dh55 per person payout not to register for the coming year.

Many Iranians are worried that losing the handouts, which they have come to depend on, will cause even more damage to their livelihoods.

“If they cut my payment and give it to somebody whose situation is worse than mine, that is OK, but we do not know what the plan is,” said Mehdi, 48, a former accountant who started driving a taxi after he lost his job a few months ago.

“Now, because of my lack of income, Nowruz is a time of shame for me in front of my family,” he said.