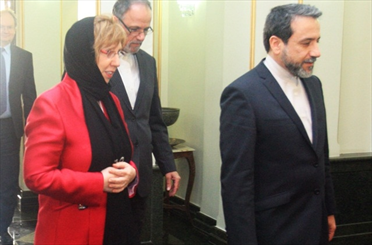 TEHRAN, March 10 (MNA) – EU Foreign Policy Chief Catherine Ashton and the EU delegation of her aids in a single-day visit to Tehran have met with high-ranking Iranian officials.

Catherine Ashton is the high representative for six world powers in Iran-Sextet nuclear talks and her visit to Iran will be of great importance and influence to the development of next round of negotiations.

After their meeting Iran’s FM and EU foreign policy chief held a joint press conference and answered to the questions of IRIB and BBC correspondents.Asked about nuclear deal Zarif told that Iran would sign a deal which respected Iranian national rights, conceding that Iran should address concerns of international community as well.

Next meeting of Ms Ashton was at the presidency building where Iran’s President Hassan Rouhani received her. Rouhani held that Iran and the European Union can hold talks and have cooperation on regional issues including the fight against terrorism and extremism, the issues of Syria, Iraq, Afghanistan and narcotics trafficking. Also ashton reiterated that the EU completely acknowledges the important role of Iran in the region and is ready to develop more dynamic ties with the country.

After the luncheon feast by Iran’s FM in the Ministry of Foreign Affairs, Ashton met with Iran’s Parliament speaker Ali Larijani at the Islamic Consultative Assembly in Baharestan.

Next Ashton meeting went on with Iran’s former secretary of the Supreme National Security Council, Saeed Jalili who has also been Iran’s chief nuclear negotiator before the 11th cabinet came into work.

The last of her Sunday meetings was with the special aid to the Leader of the Islamic Republic of Iran and the head of Strategic Research Center of Expediency Discernment Council.

After a hectic working day the EU Foreign Policy chief and the delegation of her aids left Tehran to historical city of Isfahan to sightseeing from the city’s historic monuments.