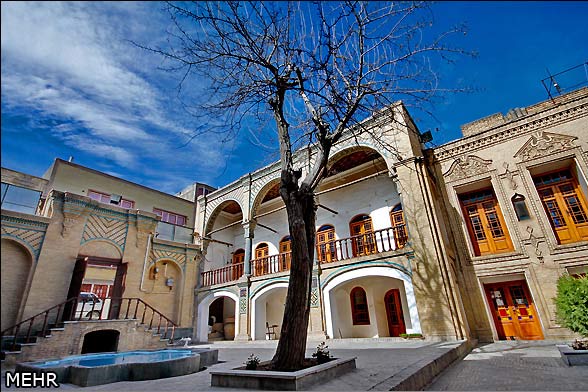 ARAK, March 9 (MNA) – The 6000-year-old Arak province of west-central Iran is placed for diverse natural and historical attractions hosting tourists from around the country.

In the fifth junction of Arak Bazar this Qajar monument is located which in August 2003 had been worked out to a Traditional Handicrafts museum. The house hosts art work by other artists, reminding their past lives amidst today’s bustling modern lifestyle which had been inundated by machine.

The Bazaar is also known as ‘indoor bazaar’ (Sarpoushideh in Persian). It is 1Km. long and has high arch and walls up to 7 meters. It houses different businesses.

Among the multiplicity of Qajar-period monuments is All-Season Bath located in the city’s most crowded district. In 1993, it was worked out to a museum. It houses collections archeological and anthropological remains to secure the rich culture of Iran for the next generation.

Located in 15Km. northeast of Arak is Meighan Wetland as one of the most beautiful ecosystems in Markazi province. The wetland is home to migratory birds such as crane, and has attracted many lovers of nature. Ecosystem analysts say the wetland is at least 2000 years old and usually hosts birds en route their migration to Siberian cold regions.

Nakhjir cave is the product of tectonic activity and chemical erosion in Delijan.

Located in the heart of Khomein is an old house where Imam Khomeini (RA) was born in 1902. The house is the most important historic building of the province with architecture going back to Qajar period (175 years ago).

One of the most important and probably most complete rock inscriptions of the country in Khomein, the inscription is manifestation of rich cultural beliefs of our ancestors. The rock inscriptions have breath-taking paintings and drawings, indicating that Stone Age man lived in the region.

Spa water complex in Mahallat is located in 15Km. northeast of the city.

Professor Mahmoud Hesabi, famous Iranian physicist and theoretician. His tomb-monument is located in Tarkhoran district of Tafresh. Every year, tourists pay homage to the late scientist. Tafresh had had human settlements before Islamic period. About the etymology of the city’s name the history books say that the city had been called Gabrash (Gabresh), since before Islamic period and even early Islamic centuries, Gabrs, or Zoroastrians were settled in Farahan alluvial plain and the adjacent areas of Ashtian.

The castle is located in a homonymous village in 56 Km. Saveh-Hamadan free roads in the Gharghabad juncture. The castle has many courtyard, porch boards, King’s seat, and sash knotwork, and several towers, all highly-stylized architecture.

In Avestan texts, Khorheh meant ‘place where sun rises,’ and a village in Mahallat. The village is located in northeast of Mahallat, and in the proximity of Dodahak, Varin, and Abgarm villages in the banks of Khorheh River.