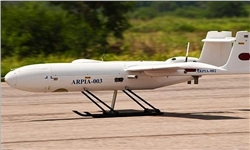 TEHRAN, March 9 (MNA) – The replica of RQ-170 drone by a young talent in Tabas, a desert city in central Iran has been unveiled by local government officials.

“Such talents should be fostered especially young talents,” the Imam was quoted by the public relations office of Tabas governor’s office.

The city’s governor Ahmad Talebian also attended the unveiling ceremony. “Today, we see the favorable conditions in the Islamic Republic of Iran. The country requires a new scientific and cultural renaissance, which only would be realized through supporting young talented geniuses like this inventor,” the governor said.

He believed that Iranian young cohort had found their true selves and reliance on religious beliefs contributed to such self-confidence, and that “we should help this process forward.”

The governor also congratulated the inventor, a Solid State Mechanics student. “We warmly shake hands of this young inventor,” he added.