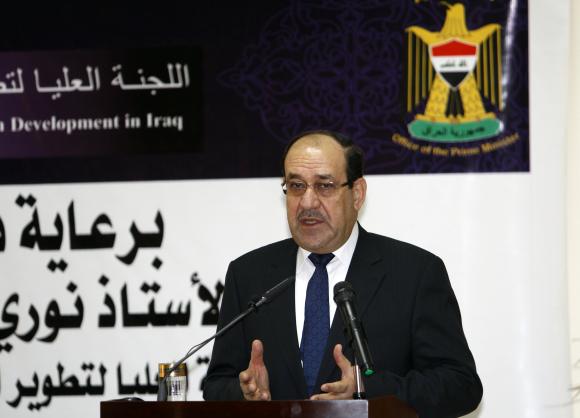 (Reuters) – Iraqi Prime Minister Nouri al-Maliki has accused Saudi Arabia and Qatar of openly funding the Sunni Muslim insurgents his troops are battling in western Anbar province, in his strongest such statement since fighting started there early this year.

Security forces have been fighting insurgents from the al Qaeda-affiliated Islamic State ofIraq and the Levant (ISIL) in Anbar’s two main cities – Fallujah and Ramadi – since January after the arrest of a Sunni lawmaker and the clearing of an anti-government protest camp prompted a tribal revolt and allowed ISIL to set up fighting positions in the cities.

Maliki’s remarks play to Iraqi fears of the Sunni Arab states as he tries to burnish his standing as a defender of the mainly Shi’ite country before elections at the end of April.

Violence has escalated in the last 12 months – ISIL has led a devastating campaign of suicide bombings since mid-2013 – and Maliki said in a mid-February speech that Saudi Arabia and Qatar were offering money to recruit fighters in Fallujah.

More than 700 people died in violence in Iraq in February, not including nearly 300 reported deaths in western Anbar province and last year was the deadliest year since 2008 with nearly 8,000 being killed.

“I accuse them of leading an open war against the Iraqi government. I accuse them of openly hosting leaders of al Qaeda and Takfirists (extremists),” he said in the interview when asked about possible Saudi and Qatari links to the violence.

Maliki has long had chilly relations with the Gulf states, who view him as too close to Iran, and has long suspected them of funding al Qaeda-linked groups in order to bring down his Shi’ite-led government.

He accused the Saudi government of allowing “commissions” there “to attract Jihadists, to lure them, to get them fighting in Iraq”.

He also blamed both countries for launching Syria’s three-year civil war through al Qaeda-linked groups that now operate on both sides of the Iraqi-Syrian border, next to Anbar.

Saudi Arabia, the United Arab Emirates and Bahrain withdrew their ambassadors from Qatar on Wednesday in an unprecedented public split between Gulf Arab allies who have fallen out over the role of Islamists in a region in turmoil.