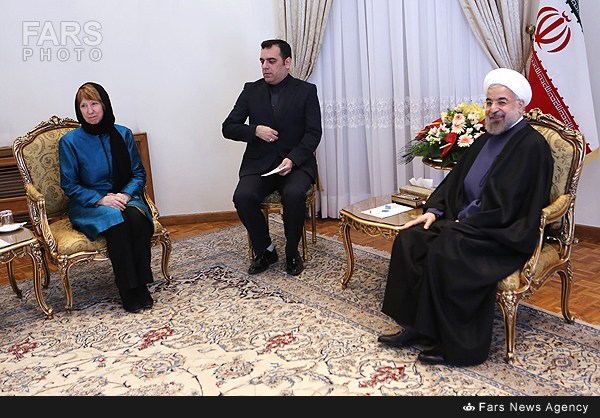 TEHRAN (Tasnim) – Iranian president underlined that Tehran and the European Union (EU) can boost their relations in a whole host of fields on the basis of mutual respect, stressing that contacts between the two sides should not be confined to negotiations over Tehran’s peaceful nuclear program.

“I believe that along with the nuclear talks that are in progress and should be advanced, it would be appropriate to consider the other fields on which Iran and the European Union can develop their ties and cooperation,” President Hassan Rouhani said in a meeting with visiting European Union foreign policy chief, Catherine Ashton, here in Tehran on Sunday.

Referring to Iran-EU relations as “traditional and historical”, the Iranian president said there exist “abundant common interests, goals and grounds” for the two sides to boost their interaction.

Rouhani reaffirmed his administration’s commitment to pursue constructive interaction with the world as part of its foreign policy agenda, and added, “The European Union is one of the grounds on which the administration is willing to create new relations.”

He also hailed a surge of visits to Iran by the political, parliamentary and trade delegations coming from Europe in recent months, and told Ashton that her trip to Tehran, as the representative of the 28-nation bloc, carries further political meanings.

As regards the possible grounds for mutual cooperation between Iran and the EU, the president noted that the two sides can forge a partnership in connection with the regional issues, including the fight against terrorism and extremism, the issue of Afghanistan, Syria, Iraq, and tackling the transit of narcotics.

Ashton, for her part, conveyed the “goodwill message” of the 28 European countries to Iran, expressing satisfaction with the perfect opportunity to hold talks with the Iranian officials on issues other than nuclear negotiations.

She said the EU acknowledges the Islamic Republic’s significance in the region, and described her visit to Iran as a sign of the European body’s eagerness to have better and more dynamic ties with Tehran concurrent with the ongoing talks on Iran’s nuclear program.

Ashton arrived in Tehran on Saturday to be the first EU high-ranking official to visit Iran in 6 years, following her predecessor’s trip to Iran in 2008.

She liaises with Iran on behalf of the Group 5+1 (the five permanent UN Security Council members plus Germany) in diplomatic efforts related to Tehran’s peaceful nuclear case.

Iran and the world powers wrapped up their latest round of nuclear talks in the Austrian capital on February 20.

In the meantime, the two sides are gearing up for a meeting of political directors on March 17, following the negotiations among technical experts which are now underway in Vienna.