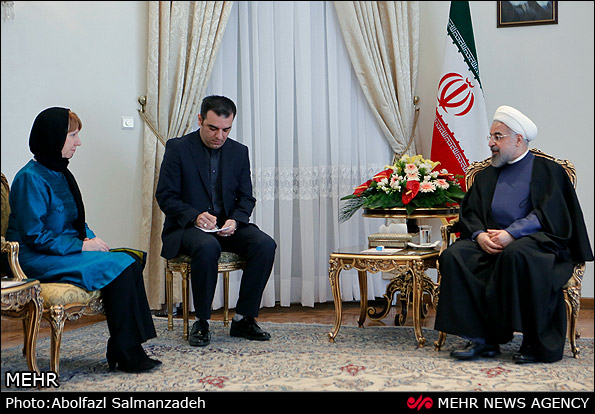 EU foreign policy chief Catherine Ashton was in Iran Sunday for top-level meetings with officials who are pursuing a track of talks they hope will eventually end international pressure and suspicions over Tehran’s nuclear programme. Ashton’s mainly symbolic visit comes amid a thaw in Iran’s strained relations with the West after Tehran signed a preliminary deal last November rolling back parts of its nuclear activities in return for a curbing of some Western sanctions.

The breakthrough was made possible after last year’s election of Iranian President Hassan Rouhani, viewed as a relative moderate who has the ear of supreme leader Ayatollah Ali Khamenei.

The November deal has opened the way to discussions aimed at reaching a definitive accord between Iran and the five permanent members of the UN Security Council, plus Germany – the so-called P5+1.

Negotiators hope to reach final agreement by July 20, when the interim pact is due to expire.

Experts from all the parties have already met to prepare the way for the next high-level talks in Vienna on March 17, which will be followed by several others rounds until July.

Ashton, who leads the P5+1’s engagement with Iran, will meet Rouhani, Foreign Minister Mohammad Javad Zarif, “as well as other senior officials and representatives from leading Civil Society organisations,” a brief statement from her office said.

He added: “Naturally the nuclear issue will be raised too.”

The trip is the first to Iran by a European Union policy chief since 2008.

“She comes to further oil the wheels of relations with Iran,” one Tehran-based European diplomat told AFP.

“It is also a goodwill gesture from the EU.”