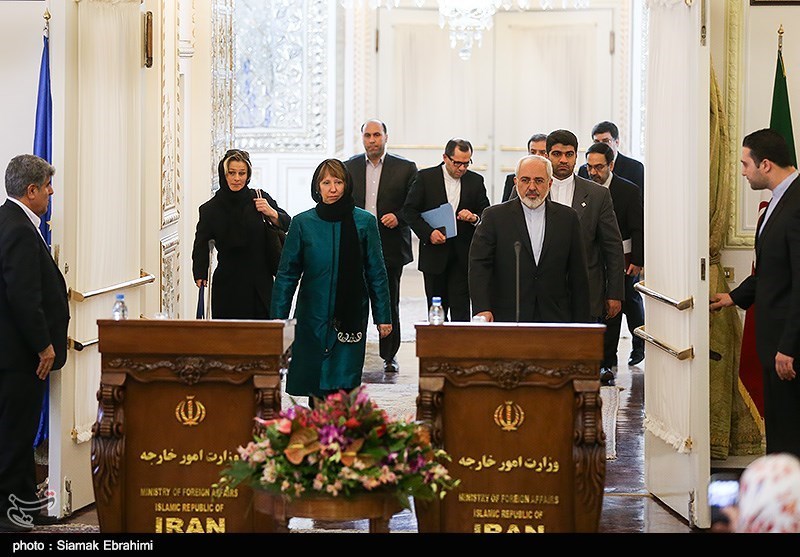 Tehran, March 9, IRNA – Visiting foreign policy chief of the European Union (EU) Catherine Ashton said here on Sunday that the way towards working out a conclusive nuclear deal between Iran and the 5+1 is tough and challenging.

In a joint press conference with the Iranian Foreign Minister Mohammad Javad Zarif, she said such an agreement will be certainly achieved, thanks to support by the Iranian nation and international community.

Asked to be explicit about her view towards Iranˈs nuclear rights which the nation deems as inalienable, she said the preliminary agreement reached with Iran contains clues to indicate how the EU and the international community thinks about the issue.

She hailed Zarif and his team for what they had done in the talks.

Ms Ashton noted that the Geneva deal was very important in itself but it is not as significant as the final solution under discussion now is.

Saying that the talks about a final deal are tough, she added that there was nothing to guarantee the success of the nuclear negotiations.

Noting that it is the first time she is holding bilateral talks with the Iranian foreign minister, she expressed gratitude to the Iranians for inviting her to Tehran, the respect paid to her and also the useful discussion she had here.

Ashton said the visit was a chance for her to express her concern about the regional situation specially the crisis in Syria in meetings with the Iranian officials.

She said she was able to focus on such issues as the future of Afghanistan and drugs-related challenges during her meetings as well.

Pointing out that she arrived in Iran on Womenˈs Day, the EU senior official said it was a great honor for her to be here on such a day which gave her the chance to discuss issues of women with Iranians.

Ashton arrived here Saturday evening upon Zarifˈs invitation. This is her first visit to Tehran since 2008.

During her stay, she is to discuss different aspects of relations between Tehran and the European Union as well as Iranˈs peaceful nuclear program in separate meetings with senior Iranian officials.

Talking in a joint press conference with Ashton, Zarif stressed that Iran will accept only an agreement which respects rights of the nation.