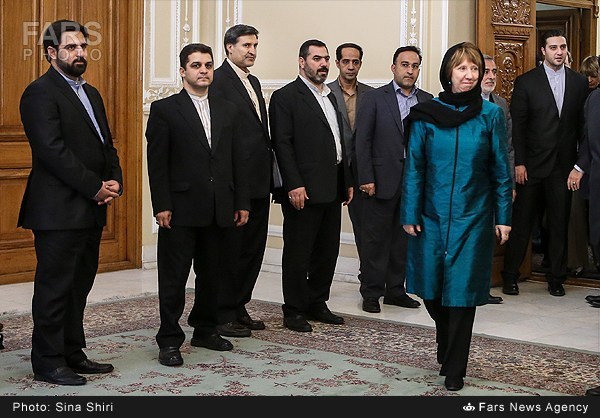 Ashton arrived in Tehran late on Saturday at the invitation of Foreign Minister Mohammad Javad Zarif to hold talks with Iranian officials.

She has conferred with foreign minister, President Hassan Rouhani, Majlis Speaker Ali Larijani and Secretary of Supreme National Security Council Ali Shamkhani during her stay in the capital.

Zarif and Ashton answered questions posed by reporters at a press conference after the end of their meeting Sunday.

Ashton is in Iran on her first visit to Tehran as the EU foreign policy chief at the head of a political and economic delegation.

Upon arrival at Mehrabad International Airport late Saturday, she was welcomed by the deputy foreign minister for legal and international affairs.

During her meetings with the Iranian authorities, she discussed various aspects of Iranˈs ties with European Union.

During her Tehran visit, Ashton is accompanied by her deputy Helga Schmidt, he special assistant Stefan Clement and her spokesperson Michael Mann.

After her talks with the Iranian officials, she will leave Tehran for Isfahan late Sunday to visit the historical monuments in the picturesque city.