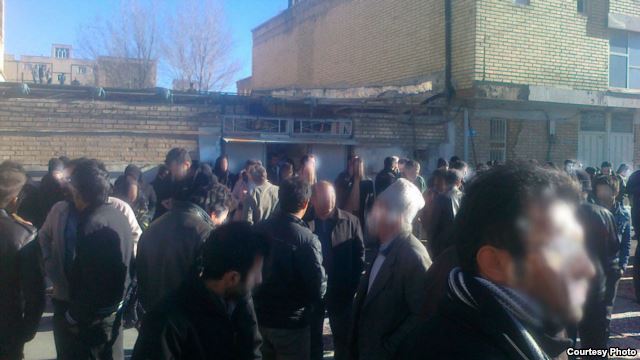 Iran’s dervishes on hunger strike inside, Outside prison

It started on March 1 when one jailed dervish — blogger and rights activist Kasra Nouri — went on hunger strike to protest what he described as the mistreatment of his fellow prisoners. Nouri was angered that two jailed members of the Nematollahi Gonabadi order of Sufis were not receiving proper health care. He then was joined by others.

Sources close to the dervishes now say that 10 of them in prison are refusing to eat.

They have been reportedly joined by more than 2,000 other Sufis outside of prison — in Iran and elsewhere in Europe, India, and other countries — who have also gone on hunger strike. A number of them have said they will protest on March 8 in front of the prosecutor-general’s office in Tehran.

The protest is not just about the mistreatment of jailed dervishes. But it focuses on state pressure on the Nematollahi Gonabadi dervishes who make the largest Sufi group in Iran. The group is believed to have more than 2 million members across Iran.

Farhad Nouri, the chief editor of the “Majzooban” website dedicated to news about the Sufis, tells RFE/RL that the dervishes want justice.

“Their demand is the implementation of Iran’s constitution, which calls for equal rights for all of Iran’s citizens. Yet  some bodies and officials don’t [respect] it, and as a result dervishes and their rights are being trampled,” Nouri said in a telephone interview from Australia, where he lives.

In recent years, dervishes have been subjected to threats, arrest, and imprisonment on security charges and their places of worship have been destroyed. They believe their growing popularity and also their beliefs — including the separation of religion from politics — are among the main reasons for the pressure they’ve been facing.

The pressure increased under the previous administration.

Nouri says that dervishes were hoping that their situation would improve with the coming to power of President Hassan Rohani.

Last month, a number of dervishes issued an open letter to Rohani in which they described some of the pressure they’ve been facing. They also complained of a “news boycott” by the Iranian media.

Nouri says that although Rohani’s promises when he entered office about more rights for all Iranians had created some hope, it is slowly being dashed.

“Unfortunately those circles in security bodies [who have pressured the dervishes] still have power and Rohani has apparently not yet been able to do anything about it. It was after his coming to power that  prison sentences for a number of dervishes were issued,” Nouri said.