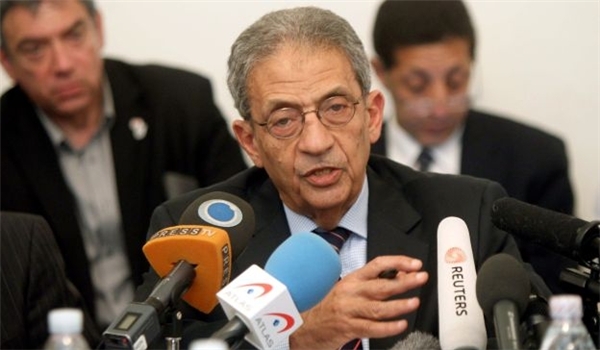 TEHRAN (FNA)- Former Secretary-General of the Arab League Amr Moussa underlined that the only way out of the Syrian crisis is inviting Iran to take part in peace negotiations which have not been successful during the last two meetings in Geneva.

Speaking in an interview with the As-Safir of Lebanon, the veteran Egyptian diplomat said the three countries of Iran, Egypt, and Saudi Arabia should be part of any political solution to the ongoing crisis in Syria.

He further stressed that working out a solution to the Syrian crisis also needed the participation of Russia, the US, Turkey and even that of the United Nations.

Noting that big powers acted incorrectly at the beginning of the Syrian crisis, Moussa said bullying powers led by a number of western countries are usually well in triggering and fueling conflicts but fail to resolve tensions.

He said during the past two Geneva conferences, the world has witnessed the inefficiency of big powers in finding a solution to the situation in Syria.

The Veteran Egyptian diplomat noted that the Syrian crisis had many negative impacts on the entire region, its neighboring countries in particular, including the spread of terrorism and destruction as well as insecurity, unrest and chaos.

On Monday, Iranian Deputy Foreign Minister Hossein Amir Abdollahian once again reiterated that Iran’s presence in the International Geneva II Peace Conference on Syria will be necessary, but Tehran would not accept any precondition in this regard.

“Iran is ready to participate in the next round of talks in the Swiss city of Geneva on the ongoing Syrian crisis only if it is invited to the event without any preconditions,” Amir Abdollahian told reporters.

He underlined that the US and other parties should be realistic in order for the Geneva talks to yield results.

“Iran has always stressed the need for dialogue and diplomacy as the only solution to the Syrian conflict,” Amir Abdollahian said.

In November 2012, Iran hosted a meeting between the representatives of the Syrian government and opposition to encourage them to start talks to find a political solution to their problems. The National Dialogue Conference kicked off work in Tehran mid November with the motto of ‘No to Violence, Yes to Democracy”.

Syria has been the scene of deadly violence since March 2011. Over 130,000 people have reportedly been killed and millions displaced due to the crisis.

According to reports, the western powers and their regional allies — especially Qatar, Saudi Arabia, and Turkey — are supporting the militants operating inside Syria.