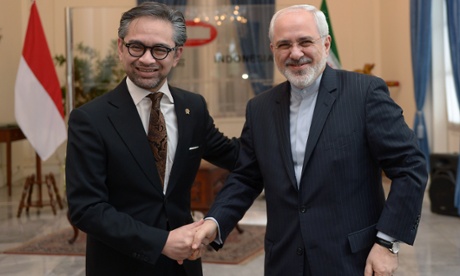 TEHRAN (Tasnim) – Foreign ministers of Iran and Indonesia discussed a broad range of issues, from trade ties to the international developments, while the both emphasized the necessity for a fresh impetus to the bilateral relations between the two Muslim nations.

During the meeting, the two ministers discussed the latest status of bilateral relations between Tehran and Jakarta, the ways to expand mutual ties amd the most recent upheavals in the regional and international arenas.

Moreover, Zarif and Natalegawa both emphasized the need for increased negotiations between the two Muslim countries over international issues in a bid to strengthen the global peace and security.

Regional and international developments, such as the Syrian crisis and the recent unrest in Ukraine, as well as the current situation in East Asia, were among the other topics the two ministers discussed.

As regards the initiatives for settlement of the crises, they also rejected the use of force, and described negotiations and diplomatic approaches as the only solution to resolve the conflicts peacefully.

As part of Iran’s policy of interaction with the world, Foreign Minister Zarif started a tour of East Asia on Tuesday with a visit to Japan for talks with Japanese high-ranking officials.

After his stay in Japan, he arrived in Indonesia on Thursday at the invitation of his Indonesian counterpart.