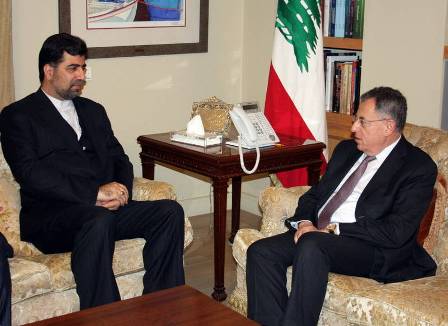 Beirut, March 6, IRNA – Head of Lebanese Al-Mostaqbal Party Fouad Siniora in a meeting with Iranian Ambassador to Beirut Qazanfar Roknabadi on Wednesday called for continuation of consultations between Iran and Lebanon and removal of some misunderstandings.

Siniora, also former Lebanese prime minister and a member of March 14, pointed to Iranˈs status in the region, and said, ˈIran and all the Arab countries should expand their relations.ˈ

The Lebanese politician condemned the recent bombings against Iranian embassy and cultural chancellery in Beirut, and said, ˈWe condemn these savage acts and are more than you against Takfiris and Takfiri thought.ˈ

Siniora pointed to the role of Lebanese resistance movement Hezbollah movement in Lebanon, and said, ˈDespite our differences with Hezbollah, I should say that if there was no resistance the lands of Southern Lebanon would never have been liberated.ˈ

During the meeting, Roknabadi and Siniora discussed important regional and international issues.

Roknabadi, for his part, condemned Israelˈs recent attack by the Zionist regime on Lebanon and also an attack on a Hezbollah movementˈs center, and said, ˈAll of us have consensus that the main enemy of the Muslim world and Muslims is the Zionist regime.ˈ

The Iranian ambassador went on to say that the Zionist regime is cooperating with the Takfiri militants in Syria and they cure their injured in Israeli hospitals their prime minister Benjamin Netanyahu also visits them in the Israeli hospitals.