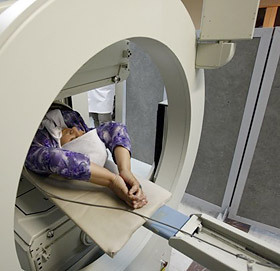 As they wait anxiously outside the operating theatre, the family of Maahi-Tala, a 43-year-old housewife diagnosed with a brain tumour, recalls how they had to sell most of her belongings to meet her medical costs.

“We sold Maahi-Tala’s two cows, three sheep, her few pieces of gold jewellery and borrowed from everyone we know to collect about half the amount,” says Maryam, her sister-in-law who has travelled with her from a village in the southwestern province of Lorestan. “The operation is going to cost 180m rials ($7,231). She is from a poor family. Her husband is sick, too.” Maryam adds that the family will have to borrow more to pay the remaining costs.

The family’s grim situation is one shared by millions of Iranians. Healthcare costs increased more than fourfold between 2005 and 2012, according to figures from the Central Bank of the Islamic Republic of Iran – a bigger rise than in any other sector over the same period.

Hassan Rouhani, the centrist president, has made tackling Iran’s high healthcare costs a priority. Taking a leaf out of his US counterpart’s health insurance programme, Mr Rouhani has launched a medical insurance plan – which he called RouhaniCare on his Twitter feed – that will insure 5m of the 12m Iranians who cannot afford premiums and gradually expand the programme to ensure that all are covered.

“The health and medical needs of people . . . must be attended to,” Mr Rouhani said last month. “The first step will be taken in the next [Iranian calendar] year [starting on March 21] to gradually bring everyone under medical insurance coverage . . . and lower people’s share of medical cost,” he added.

Iranians pay about 70 per cent of their medical bills and, while the government aims to reduce this to 30 per cent by 2015, the goal is widely seen as unachievable. The cost to the patient for an operation like Maahi-Tala’s is almost double the average annual income of a rural family.

“A serious illness for a member of a low-income family is a disaster and an acute disease in a middle-class family can change their social class,” said Mohammad Zabeti, a former member of the parliament’s health committee.

Health experts have welcomed Mr Rouhani’s insurance plan but say the high costs for patients have been compounded by the near bankruptcy of the country’s 555 state hospitals, which provide most inpatient services.

A serious illness for a member of a low-income family is a disaster and an acute disease in a middle-class family can change their social class– Mohammad Zabeti, former health committee member

State hospitals have been struggling with a deficit of 67tn rials mainly because of low medical fees – which are fixed by the government – and overdue payments by insurance companies, which reached 30tn rials this year.

Because of the debt, hospitals underpay their staff, buy supplies and drugs on credit and sometimes force patients to buy some of their medical supplies.

Mr Zabeti says decades of poor policies have pushed hospitals to the brink of “complete inefficiency”. “If former policies continue, such hospitals will be taking their last breaths,” he warns.

The country’s 350 private hospitals, which offer most outpatient services, have also suffered from a financial crisis.

Mohammad-Reza Nowroozi, a board member of the Iranian Urological Association, says although fixed fees for healthcare services in private hospitals are significantly higher than in their public counterparts, they have become economically “vulnerable” in recent years due to rising costs.

A national scheme to slash subsidies on basic commodities has led to a rise in hospital energy bills while US banking sanctions over the country’s nuclear programme have led to a 50 per cent drop in the value of the national currency, the rial, pushing up the costs of imported medical equipment.

In recent years private hospitals could just manage to survive by borrowing from shareholding physicians, by giving no dividends and not renewing equipment– Mohammad-Reza Nowroozi, Iranian Urological Association

“In recent years private hospitals could just manage to survive by borrowing from shareholding physicians, by giving no dividends and not renewing equipment,” says Mr Nowroozi.

The government has increased the health ministry’s budget by about 15 per cent and will inject an extra 78tn rials ($3.1bn) into the health sector in the coming Iranian year.

Meanwhile, a crisis in the availability of medicine last year, caused by the imposition of banking sanctions, has begun to subside following a shift in foreign policy by the Islamic regime, which has brought stability to the market.

Alireza Zali, head of Iran’s Medical Council, a non-governmental organisation representing 214,000 physicians, describes the commitment by the government to improve the health sector as “laudable”.

“Despite numerous problems, the face of the healthcare sector will definitely improve next year,” he says.