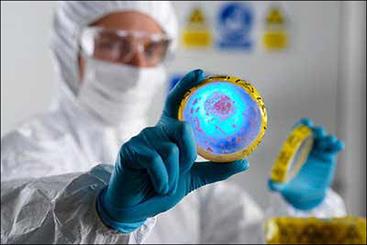 Fatemeh Khorramshahi the major researcher of the project told Mehr News that ultraviolet had wide range of applications. “These sensors are applicable in measuring ultraviolet in sunlight, performance of sunglasses, ultraviolet imaging, space communications and biological and chemical fields,” said she, “in the project first a silicon plate is oxidized in the oven and then it is placed in a deposition apparatus. In this stage, the image of electronic pieces including transistor and diode is installed on the plate, and finally, the pieces are treated chemically.”

Khorramshahi also added that during the research they had managed to develop two 2- and 5-layer sensors. “Measurement revealed that the degree of ultraviolet detection in developed sensors is very high compared to that in current sensors,” she added.

“This sensor is also sensitive to X-ray, and thus finds applications in X-ray imaging,” Khorramshahi said, believing that the advantage of the technology as using zinc oxide as a cheap component in the sensors. “Since zinc oxide is biodegradable, that can be used in biological applications without layer installation,” she asserted.

She also believed that commercialization of the product required adding layers to improve the resistance of the sensor.