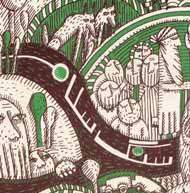 IBNA: ‘Hello Stone’ written by Iranian writer Mohammed Reza Bayrami and designed by Majid Zare was released in autumn by Iranian Fiction Foundation. The book has received an Honorary Diploma for the 2014 Best Book Design awards in Germany.

For the 2014 edition of the Leipzig Competition, 14 works were chosen out of the 57 final nominees which were presented from different countries namely Iran, Swiss, Germany, China, Poland, Netherlands and Japan.

Best Book Design awards in Germany will be presented on March 14, 2014 at the Leipzig Book Fair in Germany.

All submissions will be put on display in exhibitions at the Leipzig Book Fair, the Frankfurt Book Fair, and many other popular national shows around Europe.

After the exhibitions, the submissions will be kept in a special collection at the German National Library in Frankfurt.

The managing director of Iranian Fiction Foundation and the head of the publications will be officially invited to the award ceremony.

Akbar Khalili’s ‘Twigs of the Sour Cherry Tree’ was among the final nominees as well while last year, the Iranian book ‘The One Involved with Love’ was also in the list.

Mohammad Reza Bayrami was born in 1965 in Ardebil, Iran. His ‘The Mountain Called Me’ has bagged several literary awards such as ‘Golden Bear’ Award, ‘Blue Cobra’ Award and ‘Switzerland Book of the Year’ Award. The book was converted into German by Jutta Himmelreich.