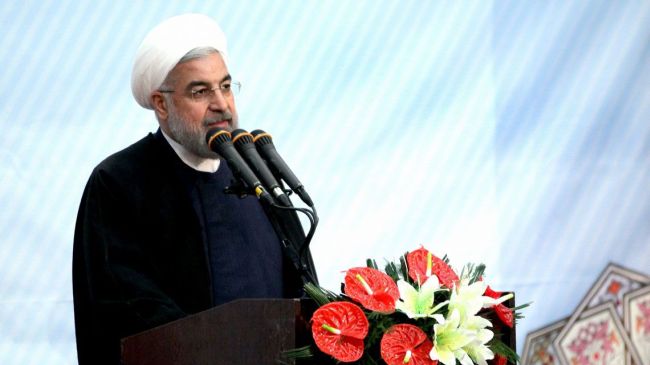 Iran’s President says that the UN’s atomic watchdog has found no evidence of military objectives in Iran’s nuclear drive.

Iran’s President Hassan Rouhani said Sunday that despite “thousands of hours” of inspection, the UN’s atomic watchdog has found no evidence of military objectives in Iran’s nuclear drive, AFP reported.

His remarks came on the eve of an International Atomic Energy Agency (IAEA) board of governors meeting in Vienna, on the sidelines of which Iran will hold expert-level talks with world powers.

Western powers “all know that nuclear science in Iran follows a peaceful path”, Rouhani said in a speech broadcast on state television.

“The agency has conducted thousands of hours of inspection, and announced it has not found any diversion from the peaceful use (of nuclear technology) to military purposes,” he added, according to AFP.

In its latest report on Iran in late February, the IAEA said the Islamic Republic was sticking to a nuclear freeze it agreed under a November interim deal with world powers.

The watchdog’s report came a month after the deal came into force.

Rouhani on Sunday defended his country’s nuclear program, saying it has “always been defensive in nature, and will always remain so.”

The remarks come a day after Rouhani claimedthat Iran has decided not to develop nuclear weapons out of principle, not only because it is prevented so by treaties.

Speaking to Defense Ministry officials, Rouhani said that if Iran wanted weapons of mass destruction, it would be easier for it to make chemical or biological weapons.

As proof of his claims, Rouhani cited a fatwa (religious decree) issued by Iran’s Supreme Leader Ayatollah Ali Khamenei which bans the production and use of nuclear weapons.

Since being elected, Rouhani has waged a “smile attack” against the West, claiming he is a moderate and is different from his predecessor, Mahmoud Ahmadinejad.

Israel’s leaders have seen right through Rouhani’s smiles. Prime Minister Binyamin Netanyahu has repeatedly said, as have other Israeli leaders, that the interim agreement that was signed with Iran in November is dangerous and will allow Tehran to continue its nuclear program and give nothing back to the West while being rewarded with sanctions relief.