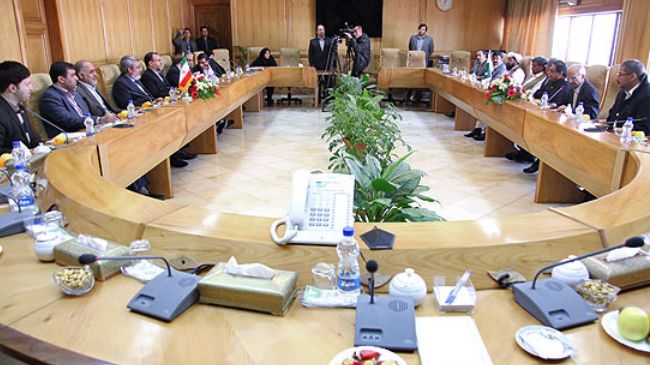 Photo shows a general view of a meeting between Iran’s Interior Minister Abdolreza Rahmani Fazli and Speaker of Provincial Assembly of Balochistan Mir Jan Muhammad Jamali in Tehran on March 2, 2014.

Iran’s Interior Minister Abdolreza Rahmani Fazli says the country strenuously safeguards its borders, stressing that no force will be allowed to enter the Iranian territory via Pakistan’s southwestern Balochistan Province.

“The Islamic Republic of Iran considers itself bound to severely defend and safeguard its borders and will not allow any force to enter Iran from Pakistan’s Balochistan border at all,” Rahmani Fazli said in a meeting with Speaker of Provincial Assembly of Balochistan Mir Jan Muhammad Jamali in Tehran on Sunday.

“We expect the Pakistani government to prevent illegal traffic along the two countries’ border,” the Iranian minister added.

He further expressed Iran’s readiness to cooperate with Pakistan to prevent illegal movements along the two countries’ border.

The Iranian minister also expressed hope that Pakistan would seriously cooperate with Iran in the fight against criminals and smuggling of narcotics.

“The two countries of Iran and Pakistan as Muslim states in the region should prevent interference of foreigners and their divisive measures in the region through a more precise understanding of enemies’ objectives and plans and by creating unity and cohesion as well as bilateral cooperation,” Rahmani Fazli pointed out.

Jamali, for his part, stressed the importance of close interaction and joint efforts between Tehran and Islamabad to fight the smuggling of narcotics in the region.

Like Iran, Pakistan will never allow any instability along the two countries’ border, he said.