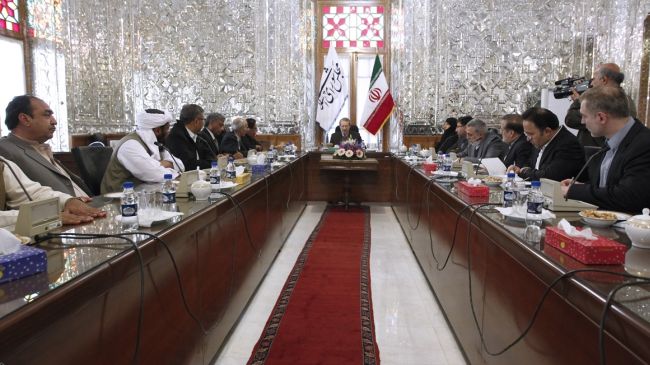 Iran’s Majlis Speaker Ali Larijani warns that unhampered acts of sabotage by criminals along the Iran-Pakistan border can affect the relations between the two countries.

In a Sunday meeting with Speaker of Provincial Assembly of Balochistan Mir Jan Muhammad Jamali in Tehran, Larijani said acts of sabotage along the Iran and Pakistan border will lead to “misunderstandings in the relations between the two countries.”

“It is necessary that Pakistani security bodies seriously and speedily resolve the issue of Iranian nationals being taken hostage,” Larijani added.

He added that Iran and Pakistan have always enjoyed amicable ties which are crucial for supporting the expansion of political, economic and cultural relations between the two countries.

Larijani’s remarks came as officials in Pakistan said on Saturday that security forces have freed 11 foreign hostages, including eight Iranians and three Tunisians, who had been held by militants in the southwest town of Turbat near the Iranian border.

According to Pakistani officials, the freed hostages did not include the five Iranian border guards kidnapped in February by a terrorist group, which calls itself Jaish-ul-Adl.

Iran has repeatedly declared that it holds the Pakistani government responsible for the lives of the Iranian hostages.

Jamali, for his part, said the presence of foreign powers in the region has created insecurity and called for formation of joint intelligence and security commissions and constant cooperation in order to promote regional peace and stability.

He added that his country’s officials are determined to settle the issue of abducted Iranians as soon as possible.

A week ago, Tehran and Islamabad held a joint border commission meeting in the Pakistani city of Quetta to discuss the abductions.