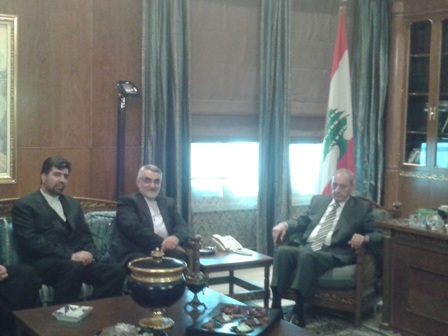 In the meeting, Iran’s Ambassador to Lebanon Ghazanfar Roknabadi as well as members of the delegation were present, too.

After the meeting, Boroujerdi told reporters that he has presented a report on Iran’s support for Lebanese government and nation as well as the latest developments in Syria war to Mr. Berry.

He stressed that there is the same viewpoint between Iranian and Lebanese senior officials that Syrian crisis has just a political solution.

Boroujerdi also condemned the recent attack of the Zionist regime against Lebanon territory.

The Iranian MP also appreciated efforts of Lebanese security and military officials to confront with terrorists and said it is expected these efforts to continue in the future.