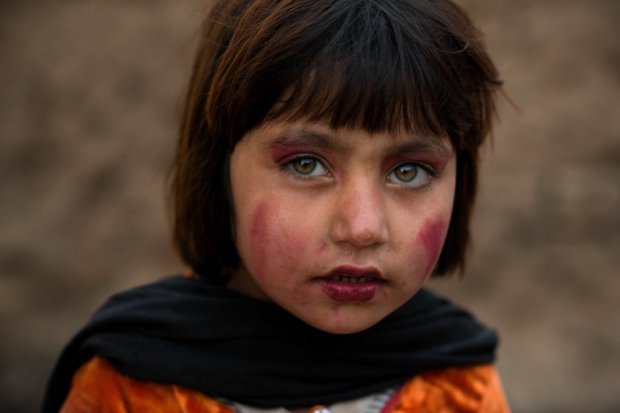 Bangkok-based AFP photojournalist Nicolas Asfouri recently visited a refugee camp for Afghans living in Pakistan, where he made this series of images of children. Most of the camp’s residents, exiled by the chronic instability of their own country, have no intention of going back to Afghanistan.

ISLAMABAD, February 21, 2014 — On my way to Kabul earlier this month, I stopped in Islamabad for two days. Some 1.6 million Afghans have made their homes in Pakistan, according to official figures. Perhaps they are more, making it the biggest refugee population anywhere in the world. Some have been here since Soviet times. Most don’t have the slightest intention of returning to their own country, where insecurity reigns. I figured that a series of pictures of  Afghan children in Pakistan, many of whom were born here and have never seen their country, would be a good starting point before going to Afghanistan on a one-month assignment.

I went to one of those huge Afghan refugee camps on the outskirts of Islamabad. It was a shanty-town, extremely poor, with houses built of clay. It looked just like an Afghan village, a community where everyone knows everyone else, where people get by on odd jobs. Houses are linked to each other by small holes, which can be a little disconcerting, when you see somebody disappearing into one house and then walk out another.

It’s a dismal place, born of a human tragedy without a solution, but from a strictly photographic standpoint, it couldn’t have been better. A completely neutral backdrop, which lets the subject of the picture stand out starkly. I had come at the ideal hour, at dusk. Soft light gave the shy smiles and deep gazes of the Afghan children the perfect contours.

It was the kind of assignment where it’s crucial to be invisible, or extremely quick, to seize the natural moment. It’s can sometimes be tricky, and it’s important to carry just a single camera, to take one’s time, to talk with people, to tell them where you’re from and what you’re doing.

I took no pictures secretly. Sometimes people let me know with a sign that they didn’t want to be photographed. Obviously, I respected their wishes. But apart from these few exceptions, nobody minded my presence. After taking a picture of a child, I would show it to the parents. Patience and dialogue are key to this kind of work.