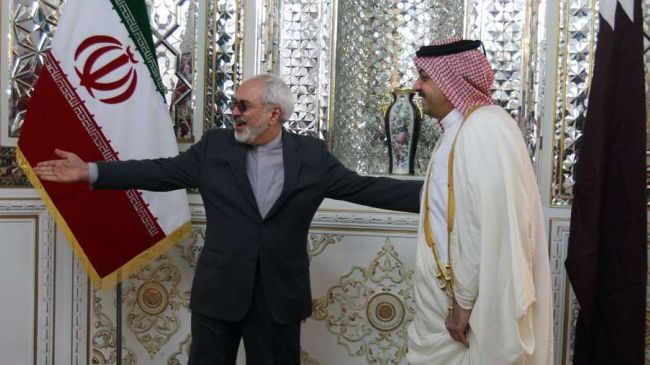 Tehran, Feb 27, IRNA – Ministers of foreign affairs of Iran and Qatar here Wednesday night were agreed that the two countriesˈ trade volume is not satisfactory and emphasized the need for expansion of bilateral economic relations.

Mohammad-Javad Zarif and Khalid bin Mohammad al-Attiyah in the meeting also considered consultations and collective cooperation in the region as constructive for the regional security and for its blossoming.

The Iranian top diplomat said the Tehran attaches great importance to its relations with its neighbors, arguing that there are lots of commonalties that tie Tehran and Doha together and therefore constant visits by the two countriesˈ officials and continuous consultations are necessary.

He said that there are strong and real incentives for the expansion and broadening of bilateral and multilateral relations, arguing that keeping in mind the good relations between the two countries, Tehran-Doha talks will continue at deputy foreign ministersˈ level.

Zarifˈs comment was a reference to a recent visit of Doha by the Iranian Deputy Foreign Minister for Arab and African Affairs Hossein Amir-Abdollahian, and his Qatari counterpartˈs near future visit of Tehran.

Zarif reiterated that Iranˈs capabilities in industrial and technological fields, including in technical and engineering services that can be used in Qatarˈs development plans show how trivial the level of the two countriesˈ economic and trade interactions in various fields are today.

The Iranian foreign minister emphasized that the two countriesˈ chambers of commerce can pave the path for broader economic cooperation very well.

He also referred to the developments in the very sensitive Persian Gulf region, arguing that such developments further broaden the fields for more serious and important collective cooperation, necessitating also greater proximity of viewpoints.

The Qatari foreign minister, too, for his part emphasized in the meeting that Tehran-Doha bilateral relations must by taking tangible steps of both sides in line with the implementation of the reached agreements serve the interests of the two nations.

ˈThe economic and trade transaction of the two countries are not at a satisfactory level at all, and Doha is interested in expansion of its economic cooperation with the Islamic Republic of Iran,ˈ said Khalid al-Attiyah.

He said that Doha believes dialogue is the best way for regional coexistence, blossoming, development, peace and security, and that the aliens cannot separate the neighboring countries from each other.

The two sides also exchanged ideas about the latest developments in Syria, emphasizing that political solution is the only way out of the ongoing crisis in that war torn country.

That is while the Iranian President noted earlier on Wednesday that Tehran is determined to further bolster all-out ties with Doha, voicing Iranˈs readiness to boost economic, cultural, tourism and environmental relations with friendly Qatar, in a meeting with the Qatari Parliament speaker.

the Qatari Parliament speaker, too, referring to Iran-Qatar ties as historic and friendly, wished success and prosperity for the Islamic Republic of Iran.

He expressed satisfaction with the serious developments which are taking place during President Rouhaniˈs term in office.