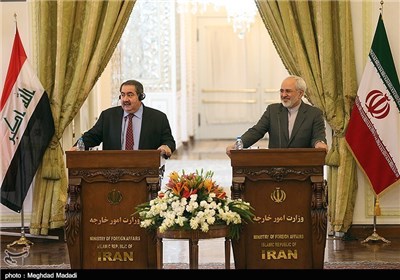 TEHRAN (Tasnim) – Iraqi Foreign Minister Hoshyar Zebari expressed confidence that his country will emerge victorious in the war it has launched against terrorism and sectarianism.

“Iraq will overcome terrorism and sectarianism,” Zebari said in joint press conference with his Iranian counterpart Mohammad Javad Zarif in Tehran on Wednesday.

As regards his meeting with Zarif, Zabari announced that they have “discussed the important and vital issues for the both countries” during the meeting held prior to the press conference this morning.

“We are trying to open up a new page in the bilateral relations,” the Iraqi diplomat said of Tehran-Baghdad ties.

Foreign Minister Zarif, for his part, welcomed the Iraqi top diplomat and his entourage, saying he has mulled over “a broad range of issues” in the meeting with Zebari.

He once again emphasized that Tehran urges “stability and peace” among the entire Iraqi groups.

Zebari’s visit to Tehran comes a few weeks after his Iranian counterpart travelled to Baghdad in mid-January.

Upon his arrival in Baghdad at the time, Zarif had reiterated that Tehran will lend its support to the Iraqi government in its efforts to fight terrorism.

Describing terrorism and extremism as threats to the whole region, the Iranian minister had also contended that tackling the menace requires regional efforts and initiatives.

Iranian officials have on various occasions pledged support for Iraq in the campaign against terrorism and extremism.