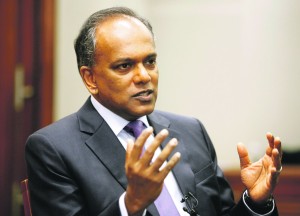 Iran has right to N. technology under NPT: Singapore FM

Nasim– Singapore’s Foreign Affairs and Law Minister K. Shanmugam said his country recognizes Iran’s right to access and use nuclear technology under the provisions of the NPT, and voiced his country’s will to bolster ties with the Islamic Republic of Iran in various fields.

Meeting with Iran’s Foreign Minister Mohammad Javad Zarif and a number of senior government officials here in Tehran as part of an introductory visit, Shamugam expressed hope that a comprehensive agreement over the nuclear standoff with Iran will be reached with the Sextet of world powers.

He further underlined Iran’s role in international equations, saying that collecting world powers in one place in assessment of Tehran’s nuclear issue should be interpreted as the significance of Iran in the world for prompting powers to consider the issue.

He also said ASEAN members are interested in cooperation with Iran. K. Shanmugam also officially invited Zarif to make a trip to Singapore.