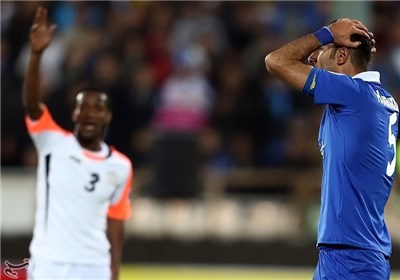 TEHRAN (Tasnim) – Iran’s Esteghlal lost its home match against Al Shabab of Saudi Arabia in the AFC Champions League group stage while another Iranian representative, Foolad of Khozestan, earned a point in its away match against El Jaish of Qatar.

In the match held in Tehran’s Azadi Stadium, Esteghlal was defeated by the Saudi Arabian team 1-0.

Palestinian forward Imad Khalili found the back of net in the 59th minute in Group A.

“The referee denied our clear penalty in this match. He was the worst referee I have ever had in my career,” Esteghlal coach Amir Ghalenoei said in the post match news conference.

“Esteghlal played well but we could not take advantage of our chances. We didn’t deserve the loss,” he added.

In the other group match, Al-Jazira of the United Arab Emirates defeated Al-Rayyan of Qatar 3-2.

In Doha, Foolad of Iran played out a goalless draw against El Jaish of Qatar in Group B.

“We didn’t play well in the first half but in the second half we played better. We could win our next match, which will be held in our home,” Foolad coach Hossein Faraki said the news conference.

Bunyodkor of Uzbekistan and Al Fateh of Saudi Arabia also shared the points.

On Wednesday, Tractor Sazi of Iran will host Al Ittihad of Saudi Arabia in Group C in Tabriz.

Iran’s Sepahan will also play its away game against Al Sadd of Qatar in Group D in Doha.