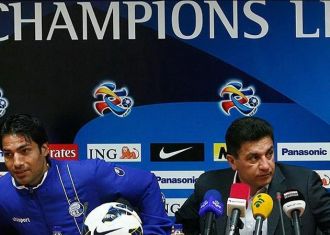 TEHRAN – Two-time Asian champions Esteghlal of Iran will host Saudi Arabia’s Al Shabab in their opening match of the AFC Champions League in Group A, while the Iranian team Foolad will play an away game against Al Jaish of Qatar in Doha in its first game in Group B.

This year, Esteghlal is determined to start the new campaign with a victory over the Saudi Arabian team in the game at Tehran’s Azadi Stadium on Tuesday.

“In these tournaments, the beginning is very important. We are well prepared for the match and have analyzed Al Shabab very well,” Esteghlal coach Amir Ghalenoei said in the pre-match press conference.

But Hashem Beikzadeh and Ahmad Jamshidian will not play on Tuesday due to injury, the coach added.

Esteghlal, which won the Asian Club Championship title in 1971 and 1991, had failed to progress beyond the Round of 16 in its first five appearances in the AFC Champions League until last year, when they reached the semifinals.

Al Jazira of the United Arab Emirates will host the Qatari team Al Rayyan at the Mohammed Bin Zayed Stadium in Abu Dhabi in another Group A game.

And Foolad will play Al Jaish in Group B at the Abdullah bin Khalifa Stadium in Doha.

Foolad, which is at the top of the table in the Iranian Professional League, is seeking a victory over the Qatari outfit.

“First of all, I am happy to be here after many years. I played for Al Sadd many years ago, and I have to say that Qatar’s football has greatly progressed in recent years,” Foolad coach Hossein Faraki said in the pre-match press conference.

“We have analyzed Al Jaish and know the team very well. Without a doubt, Foolad is here to defeat Al Jaish. However, I think getting one point against them would not be a bad result since Al Jaish is second in the Qatar Stars League,” the Foolad coach added.

Also, Bunyodkor of Uzbekistan will host debutants Al Fateh of Saudi Arabia in Group B.