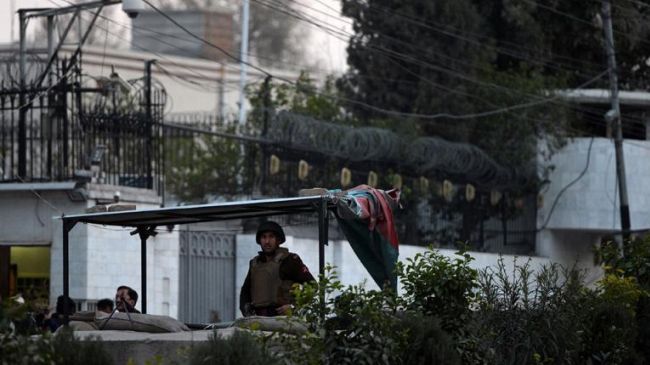 Pakistani security personnel stand guard outside the Iranian consulate following the bomb attack in Peshawar on February on February 24, 2014.

Escalating violence against the Islamic Republic of Iran from the volatile region of Baluchistan shows that Tehran’s approach toward regional insurgency may require revision.

A suicide bomber blew himself up outside the Iranian consulate in Peshawar in northwest Pakistan on February 24, killing two security guards and wounding dozens. A Pakistani Taliban group claimed responsibility and vowed more attacks on Iranian installations “everywhere.”

Iran’s approach to dealing with insurgency in its Baluchistan province, primarily based on militarizing the region and blaming foreign countries, could prove ineffective in decreasing tension and threaten its solid relationship with Pakistan. Just last week, in response to the hostage-taking of Iranian border guards by a terrorist group, Iranian Interior Minister Abdolreza Rahimi Fazli stated that Iranian security forces reserve the option of entering Pakistani territory should Islamabad fail to secure its border with Iran.

In the past, Taliban, Wahabis, the United States, and Saudi Arabia have repeatedly been blamed by the Iranians for promoting unrest and insurgency in Baluchistan, including for the killing of 12 people in Iran’s Kerman province in May 2006 and 14 Iranian border guards in October 2013.

There have been occasions where Iran has blamed “elements” within Pakistan’s security forces or the “shortcomings” of the Islamabad government for not doing enough to prevent insurgents from entering Iranian territory. Yet Iran has avoided directly blaming the Pakistani government for the violence at its border.

Now, however, recent threats by the Iranian government to enter Pakistani territory are unprecedented and seem at odds with Iran’s past approach towards Pakistan.

In March 2013, Iran and Pakistan reached a security agreement aimed at combating terrorism and drug trafficking, which was signed by then Iranian Interior Minister Mostafa Mohammad-Najjar and his Pakistani counterpart, Rehman Malik. The content of the agreement, which is being discussed now in Iran’s parliament, is not public. However, Interior Minister Rahimi Fazli claims that once approved, Iranian armed forces will be able to enter Pakistani territory.

Baluchistan, the neighboring province between Iran and Pakistan, is prone to political turmoil.

In the 1970s, the Shah of Iran provided Pakistan full military and financial support in a crack-down on Baluchi separatists. Iran and Pakistan have been cooperating and exchanging intelligence on border security issues for decades.

However, the Pakistani region of Baluchistan is now more insecure. Iranian Baluchistan is also volatile but largely under the control of the central government. The region has served as a major path of drug trafficking from Afghanistan to Pakistan and Iran, and from Iran extending to Europe.

Diesel smuggling has for decades been part of illicit trade in the Iran-Pakistan border region. However, Iran’s declining currency, due to sanctions, has turned fuel smuggling into a broad and organized network. At the same time, drug addiction is becoming Iran’s number one social issue and has forced the Iranian government to take stronger measures to combat drug trafficking.

Iranian Baluchi Sunni militants, who are believed to share ties with Pakistani Baluchis, have conducted several violent operations in the past including a suicide bombing in 2010 that killed dozens of people at a Shia mosque, the killing of a clergy member from the Iranian Supreme Leader’s Office in Baluchistan, the abduction and killing of hostages, and attacks against security force posts.

Tehran’s violent response to ethnic tension in Baluchistan includes the hanging of Baluchi prisoners. Most recently, 16 prisoners were hanged in retaliation for the killing of 14 Iranian border guards on October 25 of last year, for which the little-known Sunni group Jaish al-Adl claimed responsibility.

It is noteworthy that Iran, while continuing its violent crackdown on Baluchi militants, has avoided playing the ethnic card inside Pakistan. The government has primarily blamed the West and the United States, the Saudis, and occasionally the “Pakistani army and ISI,” but never attempted to organize armed groups against the Pakistani government. Iran, in desperate need of stability in its Baluchistan, is well aware that induced tension would have a destabilizing impact on both “twin provinces.”

In 2007, the Islamic Revolutionary Guards Corps (IRGC) started building a barrier along Iran’s border with Pakistan. The multi-million-dollar project, which includes a 91.4 cm thick and 3.05m tall concrete wall, large earth and stone dams, and deep ditches, is expected to be completed by September 2014. According to Rahmani Fazli, except for 300 kilometers of Iran’s border with Pakistan in the Saravan region, the entire Eastern border has been secured and the possibility of insurgents entering Iranian territory is “almost” zero.

It is possible that the border project, once finished, will reduce trafficking and illegal crossings at the border. However, a modern border isn’t enough to make the ethnic tensions inside Iran disappear. The Islamic Republic and the Shia-centric government of former president Mahmoud Ahmadinejad have made little effort to fill the gap between the central government and the Sunni population, especially in the deprived region of Baluchistan. Instead, Ahmadinejad’s government and the IRGC militarized the region and alienated the Baluchi population.

President Hassan Rouhani, who in June 2013 replaced Ahmadinejad, won the majority of votes in the Sistan and Baluchistan province. Molavi Abdolhamid, a popular and well-respected Sunni Friday prayer leader of the city of Zahedan in Sistan and Baluchistan, met with Rouhani in June of last year urging himto appoint Sunnis to the cabinet level. It did not happen. However, the Rouhani administration, at least verbally, has taken early steps to narrow the gap between the Baluchi population and the central government.

Interestingly, some of the first calls against violence in the region, including against the killing of Iranian border guards in October, are always issued by Sunni Baluchi leaders. In a statement, Molavi Abdolhamid condemned the killing and warned that violence is harming the interests of the Baluchi population.

There are differences within the Iranian establishment on how to deal with ethnic challenges. But instead of blaming foreign countries for creating these tensions, which may very well be true, Tehran needs to accept responsibility and take reasonable steps to win the hearts of its minorities.

At the same time, Iran  appears keen on maintaining a cordial relationship with Pakistan. Just this month, Rouhani told Pakistan’s new ambassador to the Islamic Republic that “Iran is ready to expand its political and economic relations with Pakistan.”

In response, the ambassador, Noor Muhammad Jadmani, announced that PM Nawaz Sharif is planning to travel to Iran. Meanwhile Iranian Parliament Speaker, Ali Larijani, told the Chairman of Pakistan’s Senate, Syed Nayyer Hussain Bokhari on February 19 that “recent terrorist attacks will not have an impact on the friendly relations between Iran and Pakistan.”

In the midst of the ongoing negotiations with world powers over its nuclear program, which have made surrounding Arab countries nervous, Iran needs friendly relations with non-Arab regional states more than ever. Alienating a neighbour as important as Pakistan is the last thing it should do. In fact, the viable path to a more stable region may include empowering Baluchistan to isolate extremists.