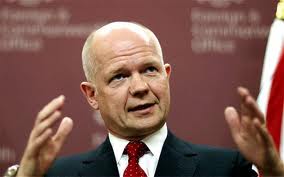 Foreign Secretary statement to Parliament on Ukraine, Syria and Iran

Foreign Secretary William Hague has updated Parliament on the situation in Ukraine and Syria and relations with Iran.

Mr Speaker, with permission I will make a Statement on the situation in Ukraine and Syria and relations with Iran.

Last week more than 80 people were killed and 600 injured during the worst bloodshed in Ukraine since the fall of communism. It was the culmination of unrest that began in November when President Yanukovych announced that the Government would not sign an EU Association Agreement. The House I know will join me in sending condolences to the families of those who died or were injured.

On Thursday I attended the Emergency Meeting of the EU Foreign Affairs Council, which agreed sanctions on those responsible for the violence, as well as assistance to promote political dialogue and help for the injured.

On Friday President Yanukovych and the opposition signed an agreement, also supported by the whole European Union, and I pay tribute to my French, Polish and German colleagues for their efforts to bring this about.

But events moved rapidly after that, including the departure of President Yanukovych from Kyiv, and the removal of guards from government buildings.

On Saturday the Ukrainian Parliament, the Rada, voted to restore the 2004 constitution, to release Yulia Tymoshenko, and to impeach the President. He has said he will not step down, but it is clear that his authority is no longer widely accepted in Ukraine as a legitimate President. A number of members of the previous government have been dismissed, and appointments made in a new unity Government. Rada Speaker Turchynov has been appointed acting President until early elections on 25th May.

Ukraine now has a pressing need for constitutional reform, improvements to its political culture, free elections, an end to pervasive corruption and the building of a stable political structure. We look to the new government to create the conditions for such change, in a spirit of reconciliation, and to ensure accountability for human rights violations.

For our part, the international community must work with the new government to discourage further violence and agree international financial support. Ukraine’s financial situation is very serious and, without outside assistance, may not be sustainable. An economic crisis in Ukraine would be a grave threat to the country’s stability and have damaging wider consequences.

I discussed this work with the German and Polish Foreign Ministers over the weekend, and I spoke to Foreign Minister Lavrov of Russia earlier this afternoon. The Prime Minister has spoken to President Putin, Chancellor Merkel and Prime Minister Tusk, and the Chancellor discussed Ukraine with G20 Finance Ministers in Australia. After this Statement I will leave for talks on this and other issues in Washington with Secretary Kerry.

While in Washington I will hold talks with the International Monetary Fund, which is best placed to provide the financial support and technical advice to Ukraine. Such support can be provided quickly once requested by the new government. It requires a stable and legitimate government to be in place and a commitment to the reforms necessary to produce economic stability. International financial support cannot be provided without conditions and clarity that it will be put to proper use.

Baroness Ashton is visiting Kyiv today, and I will visit shortly. Our fundamental interest is democracy, human rights and the rule of law in Ukraine. This is not about a choice for Ukraine between Russia and the EU, it is about setting the country on a democratic path for the future. We want the people of Ukraine to be free to determine their own future, which is what we also seek for the people of Syria.

It demands an immediate end to the violence, the lifting of sieges of besieged areas, and the unimpeded delivery of humanitarian aid including, importantly, across borders where necessary. It authorises the UN to work with civil society to deliver aid to the whole of Syria. It condemns terrorist attacks, and demands the implementation of the Geneva Communiqué leading to a political transition, and says this should include the full participation of women.

The passing of this Resolution is an important achievement, but it will only make a practical difference if it is implemented in full. We will now work with the United Nations and our partners to try to ensure that the regime’s stranglehold on starving people is broken.

The UK continues to set an example to the world on humanitarian assistance. Our contribution to the Syrian people now stands at £600 million; £241 million allocated for humanitarian assistance inside Syria, £265 million to support refugees in Jordan, Lebanon, Turkey, Iraq and Egypt; and £94 million of allocations currently being finalised.

We have pressed for other countries to do more, including at the Kuwait Conference last month that resulted in more than $2.2 billion in new pledges.

The Security Council Resolution is a chink of light in an otherwise bleak and deteriorating situation. An estimated 5,000 Syrians are dying every month. A quarter of a million remain trapped in areas under siege. The bombardment of civilian areas with barrel bombs continues unabated, and there are reports of attacks with cluster munitions as well. An Inquiry led by distinguished British experts reported on the photos of the bodies of around 11,000 tortured and executed Syrian detainees. Two and a half million Syrians are refugees in the region, three quarters of them women and children. The UN expects 4 million refugees by the end of this year.

Against this horrifying backdrop we continue to seek a negotiated settlement to the conflict. But there is no sign of the Assad regime having any willingness whatsoever to negotiate the political transition demanded by the UN Security Council.

The second round of Geneva II negotiations ended on 15th February without agreement on future talks. UN and Arab League Envoy Lakhdar Brahimi had proposed an agenda for a third round of talks focussing on violence and terrorism – the regime’s stated priority – and a Transitional Governing Body, in parallel. The regime refused this. As a result the talks were suspended with Mr Brahimi clearly laying responsibility for this at the regime’s door.

The National Coalition, by contrast, approached the negotiations constructively and in good faith. They published a statement of principles for the Transitional Governing Body, stating that it would enable the Syrian people to decide their own future and protect the rights and freedoms of all Syrians.

Those supporting the regime side, including the Russian and Iranian governments, need to do far more to press the regime to take this process seriously and to reach a political settlement, as we have done with the opposition.

We will continue our support to the National Coalition and to civil society in Syria. We are providing £2.1 million for Syrian civil defence teams to help local communities deal with attacks, and improve the capability of local councils to save the lives of those injured and alleviate humanitarian suffering. This includes training which is now underway and £700,000 of civil defence equipment including personal radios, rescue tools, fire-fighting clothing, fire extinguishers, stretchers and medical kits.

The UK is also proposing a £2 million package of training, technical assistance and equipment support to build-up the capacity of the Free Syria Police, working with the US and Denmark. I have laid before Parliament a minute to approve £910,000 of equipment, including communications equipment, uniforms and vehicles for the Free Syrian Police.

We also intend to make a contribution to the Syria Recovery Trust Fund, established by the UAE and Germany, focusing on healthcare, water supply, energy supply and food security.

And we are working with the Supreme Military Council to agree the best way of restarting our non-lethal support, which we halted temporarily in December. The regime’s foot-dragging is also clear on the removal of chemical weapons from Syria. According to the OPCW, only 11% of Syria’s declared chemical stockpile has been removed, and the regime has missed the 5th of February deadline for removing all chemicals. This has delayed the destruction operation by months and puts the 30th of June final destruction deadline in jeopardy. This slow rate of progress is unacceptable. The UN Secretary General and the OPCW have made clear that Syria has all the necessary equipment to enable the movement of the chemicals. And the OPCW’s Director General is pressing the Syrians to accept a plan that would see the removal of all Syrian chemicals in a considerably shorter period enabling the deadline to be met.

Turning to Iran, the first step agreement with Iran came into force on 20th January and continues to be implemented.

The E3+3 and Iran met last week to start negotiations on a comprehensive agreement aimed at ensuring that Iran’s nuclear programme is and always will be exclusively peaceful. The talks were constructive. The E3+3 and Iran agreed on the issues that need to be resolved as part of a comprehensive agreement; and in broad terms the approach to negotiations in the coming months.

The next round of talks will be in mid-March in Vienna. The E3+3 and Iran plan to meet monthly in order to make swift progress on the issues that need to be resolved in the ambitious time frame we agreed under the November Geneva deal of implementation starting within a year.

The House should be under no illusion that the challenges remain very considerable. A comprehensive solution must address all proliferation concerns related to Iran’s nuclear programme. To that end, existing sanctions remain intact and we will continue to enforce them robustly.

We continue to expand our bilateral engagement with Iran, indeed Iran’s non-resident Charge d’Affaires is visiting the UK today. Last Thursday we and Iran brought protecting power arrangements to an end. This is a sign of increasing confidence that we can conduct bilateral business directly between capitals rather than through intermediaries. I thank the governments of Sweden and Oman for acting as protecting powers since the closure of our Embassy, and for their strong friendship and support to the UK. We will continue step-by-step with these improvements in our bilateral relations providing they remain reciprocal. We are , for example, working together on ways to make it easier for Iranians and British citizens to obtain consular and visa services.

On all these issues we will maintain intensive diplomatic activity in the days ahead and I will continue to keep the House informed on our work with other nations – whether it be in Europe, the Middle East or the prevention of nuclear proliferation- to ensure a more peaceful and stable world.