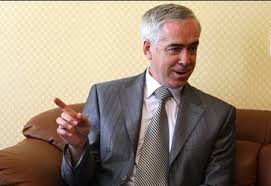 Speaking to reporters, Samarskiy said the black era of communism has come to an end in Ukraine.

Samarskiy said since the independence of Ukraine two decades ago, the communist party has ruled the country and recent events and popular protests against corruption of the Yanukovych government marked the end of communism in Ukraine.

The ousted Ukrainian president, Yanukovych, wanted to flee the country but Ukrainian border guards prevented him from leaving Ukraine, the ambassador said.

He said that no country, even Russia, agreed to grant asylum to Yanukovych.

On sanctions by the European Union and the United States on Ukraine, Samarskiy said the sanctions will not apply to the new era.

Asked about the future of Tehran-Kiev ties, Samarskiy said it was too early to talk about such issues.

He also called for Iran-Ukraine Joint Economic Commission session to be held at the earliest after the session had been postponed twice in the last six months.