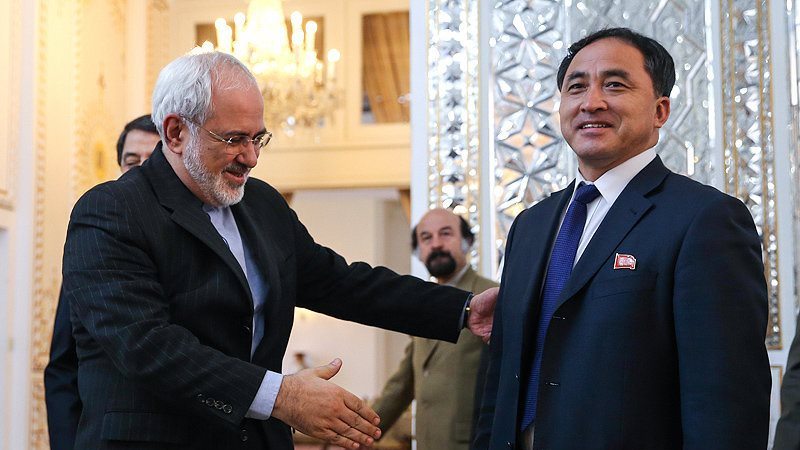 Noting the two states’ common views over a number of regional and international issues, the Iranian foreign minister stressed Tehran’s determination to establish sustainable relations with Pyongyang, and said continued consultations and exchange of views between the two countries’ senior officials is a necessity to this end.

He also reiterated Iran’s continued support for the reunification of the two Koreas, and expressed the hope that the North and the South would remove their misunderstanding through peaceful means, specially through talks.

The Iranian foreign minister reminded that resolution of misunderstandings in the Peninsula would serve the interests of both nations and help preserve peace, security and stability in the region.

Zarif stressed Iran’s firm stance on global nuclear disarmament, but meantime underlined all countries’ entitlement to the right to benefit from the peaceful nuclear technology.

The North Korean deputy foreign minister, for his part, said that Pyongyang’s high-ranking officials pay special attention to the consolidation and expansion of ties with Iran.

“The people and government of (North) Korea have always wanted the success and increasing progress of Iran; they have always supported Iran’s peaceful nuclear policy and opposed imposition of political and economic pressures on the country,” the North Korean deputy foreign minister said.

Last year, Iran’s former President Mahmoud Ahmadinejad announced Tehran’s readiness to play a mediating role in East Asia to soothe escalating tensions between the two Koreas.”I ask you as a friend to settle the problems wisely and through talks and negotiations as in the past,” Ahmadinejad said last April, addressing East Asian countries, including China, Japan and South and North Koreas.

“You should be vigilant and Iran is ready to do mediation to help resolve problems through talks and negotiations,” he added.

Ahmadinejad warned that enemies of East Asian states had plotted to prevent these countries’ further progress through staging a devastating war in the region, and said, “You shouldn’t allow the enemies of humanity to destroy you in a bid to improve their own conditions.”

Tensions began escalating on the Korean Peninsula after international sanctions were imposed on North Korea in response to a long-range rocket launch in December, 2012, which world powers condemned as a ballistic missile test. North Korea responded by carrying out a third nuclear test in February, which was followed by more sanctions.

Pyongyang threatened pre-emptive nuclear strikes against the US mainland and US military bases in the region.

North Korea has also repeatedly blamed its neighbors, but ultimately the US for the escalating tension.

In the meantime, Washington has indeed been increasing its presence around the Korean Peninsula.

Yet, tensions in the Korean Peninsula have deflated and the situation has improved to some extent in the last few weeks after the two sides allowed family reunions to be resumed.