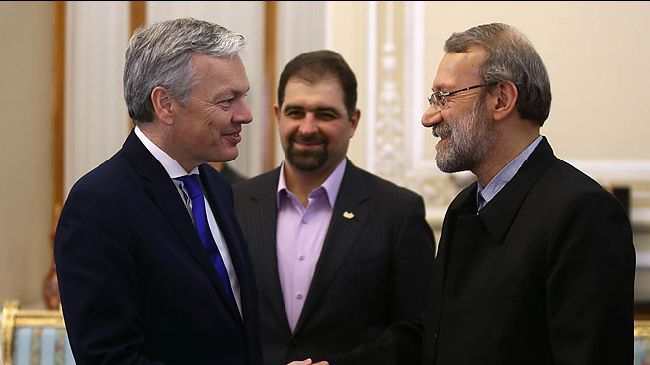 Iranian Majlis Speaker Ali Larijani has expressed support for the enhancement of bilateral relations with Belgium, particularly in the domain of parliamentary cooperation.

In a meeting with visiting Belgian Foreign Minister Didier Reynders in Tehran on Sunday, Larijani hailed Tehran-Brussels ties as “positive”, emphasizing that “Iran’s Majlis supports the expansion of political and economic cooperation with Belgium, especially in the parliamentary sphere.”

Larijani also pointed to Iran-Belgium cooperation in fighting drug trafficking, saying the Islamic Republic has been “engaged in a serious campaign against terrorism and drug smuggling despite an increase in Afghanistan’s problems” caused by the US-led invasion of the neighboring country.

He also touched upon Tehran’s nuclear negotiations with the P5 + 1 group, which comprises Russia, China, France, Britain, Germany and the US, and said the country’s legislative branch supervises the implementation of the interim deal signed between the two sides in Geneva, Switzerland, last November.

Iran and the six countries are currently in talks to reach a final agreement aimed at fully resolving the Wsest’s decade-old dispute over Tehran’s nuclear energy program.

The senior Iranian official further pointed to the West’s inaccurate understanding of realities in Iran, expressing hope that “regular negotiations” between Iranian and European officials would clear up such “misunderstandings.”

The top Belgian diplomat, for his part, said his country welcomes the expansion of Tehran-Brussels ties in different areas, underlining the significance of parliamentary ties between the two countries.

During his trip to Tehran, the Belgian foreign minister also exchanged views on issues of bilateral significance with Iranian President Hassan Rouhani as well as his Iranian counterpart Mohammad Javad Zarif.