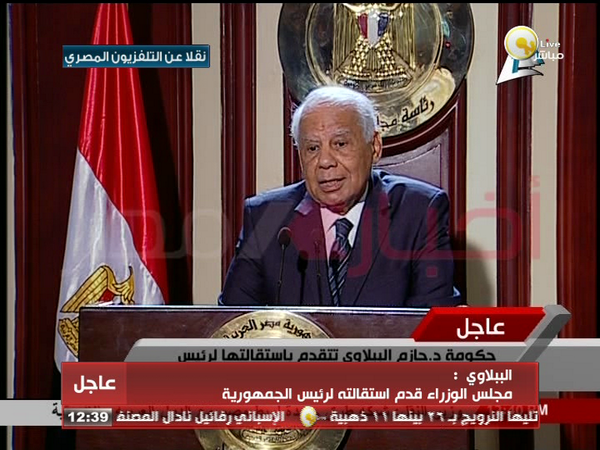 Egyptian Prime Minister Hazem el-Beblawi confirmed that the government has resigned on Monday, according to Reuters news agency.

“Today the cabinet took a decision to offer its resignation to the president of the republic,” Beblawi said in a televised statement, without giving a clear reason for the decision.

Citing an unnamed source,  state-run Al Ahram newspaper said on its website on Monday  the decision was made after a 15-minute meeting of the cabinet.

Army chief Field Marshal Abdel Fattah al-Sisi, who is expected to run for president, was part of the cabinet, serving as defense minister.

If the resignation is accepted by Interim President Adly Mansour, Ibrahim Mahleb, minister of housing in Beblawi’s government, is expected to be commissioned to form the new cabinet, according to sources cited by Ahram Online.

In an interview with Al Arabiya News in January, Beblawi was asked whether Egypt was returning to military rule following the army-backed ouster of Mursi last year.

“This is something people have in their minds, in their imagination. I’ve been in the cabinet for about six months, I haven’t felt any time that I am run by the military people,” he said.

“I told you my conviction and I promised prior to my assuming a public office, that I think Egypt after January 2011 is immune to military dictatorship and military rule. On the contrary, people are much more in command than ever before.”