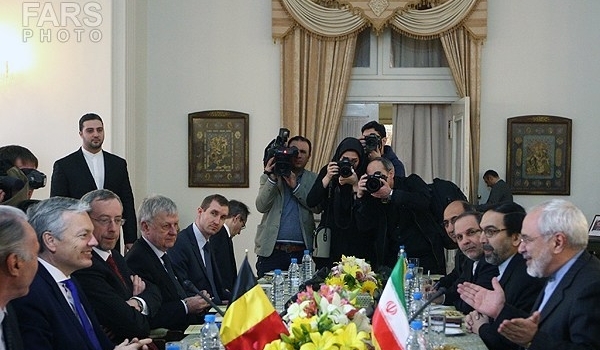 “This is a safe, stable business environment,” Zarif said at a joint press conference with Belgium counterpart Didier Reynders in the Iranian capital. He invited Belgian companies to “place themselves strategically” and consider business partnerships with Iranians.

Iran, holder of the world’s fourth-largest proven oil reserves, saw its economy shrink more than 5 percent in the fiscal year through March under the weight of international sanctions. Some of the trade restrictions and capital controls, imposed over the nation’s nuclear work, were suspended after a Nov. 24 interim deal to freeze parts of the atomic program. Iranian oil exporters, financial institutions and companies linked to the country’s nuclear work are still sanctioned.

Last week, Iran and six nations involved in negotiations over its nuclear program agreed on a schedule for talks in an effort to reach a final accord before the interim deal expires in July. A comprehensive accord would lift all sanctions in exchange for guarantees that Iran’s nuclear program is meant only for civilian purposes, as Iranian officials maintain.

In parallel, European Union foreign policy chief Catherine Ashton, who leads talks with Iran on behalf of the U.S., U.K., France, Germany, Russia and Germany, is to meet Zarif monthly. The next gathering is scheduled in Vienna on March 17, and Ashton will pay her first visit to Tehran before that, Zarif said Feb. 20.