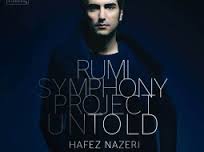 An innovative synthesis of Middle Eastern and western elements, the album introduces Nazeri as one of modern music’s most exciting new visionaries, the English-language daily ˈIran Dailyˈ reported on Sunday.

Co-produced by Nazeri and David Frost, who was just awarded the Grammy for ‘Producer of the Year, Classical’, ‘Untold’ is one of the first major releases celebrating the poetry and philosophy of the legendary 13th century Persian poet Molana Jalaleddin Rumi and his eternal message of peace, unity and love.

The album features 38 Grammy Award winning musicians and engineers and took over four years and more than 5,000 studio hours in five countries to complete.

One of the album’s many highlights are the vocals of Hafez’ father, iconic Persian vocalist Shahram Nazeri, who was the first musician to incorporate Rumi’s poetry into song some forty years ago and who’s sold over seventy-five million recordings to date. The album’s liner notes features the poetry of Rumi as transcribed by best-selling author Deepak Chopra.