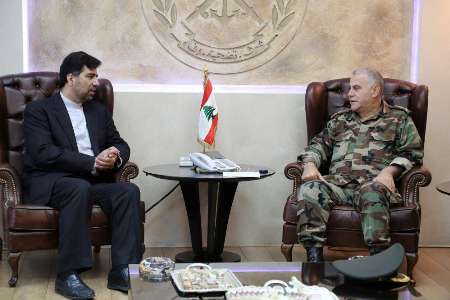 Lebanese general vows to follow up terrorist blasts in Beirut

In a meeting with Iran’s Ambassador to Beirut Ghazanfar Roknabadi on Saturday, General Kahwagi said that he ordered related officials in the armed forces to do necessary cooperation with Iran’s embassy to provide full security for buildings and offices belonging to the embassy in Lebanon.

Roknabadi, for his part, Appreciated Lebanese army acts so far to support and protect Iran’s offices in Lebanon and their efforts to identify and arrest perpetrators in recent terrorist operations, especially persons related to terrorist grouplet of Abdullah Ezaam.

The ambassador also praised Lebanese military counterintelligence to identity recent suicide operation elements against Iran’s cultural attaché office in Beirut in 24 hours and said the success was the result of joint cooperation and collective work of related bodies.