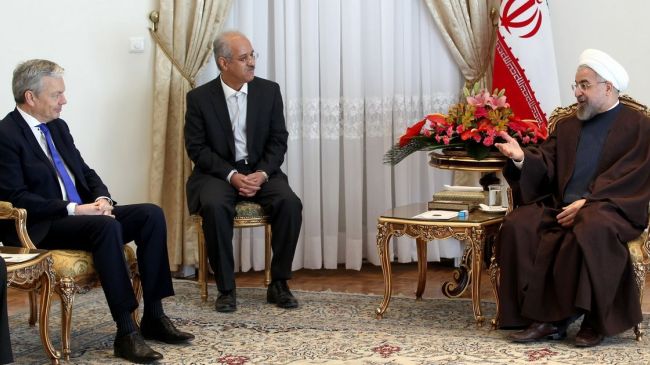 “Iran’s peaceful nuclear activities are transparent and under the supervision of the International Atomic Energy Agency (IAEA) and we want the preservation of all the principal rights of our nation in the final agreement,” Rouhani said in a meeting with the visiting Belgian Foreign Minister Didier Reynders in Tehran on Sunday.

He expressed hope that the Sextet of world powers would also contribute to the building of “the first step of confidence” between Iran and the West.

“Sanctions, particularly unilateral sanctions, are a breach of human rights and against the interests of nations,” he added.

Iran and the five permanent members of the UN Security Council – the United States, China, Russia, France and Britain – plus Germany wrapped up their latest round of nuclear talks in the Austrian capital, Vienna, on February 20.

Iranian Foreign Minister Mohammad Javad Zarif, who is Iran’s top negotiator in the talks, said both sides came up with a framework for comprehensive negotiations to reach a final agreement.

The talks in Vienna followed earlier negotiations in the Swiss city of Geneva, which resulted in a landmark interim deal between Iran and the six powers in November 2013. The deal took effect on January 20.

The Iranian president further described the relations between Tehran and Brussels as historical and positive, saying, “Belgium should play a greater role in the expansion of ties between Iran and the European Union (EU).”

Rouhani said Iran is the anchor of peace and stability in the region and added that Tehran and the EU can cooperate on regional and international issues.

He said both Europe and the Middle East are suffering from terrorism and extremism and expressed Tehran’s readiness to interact with the EU to counter terrorism and violence.

The Belgian foreign minister, for his part, said that his country is keen to improve relations with Iran.

Reynders hoped that the final agreement between Iran and the six powers would lead to the normalization of economic relations between Tehran and European countries.