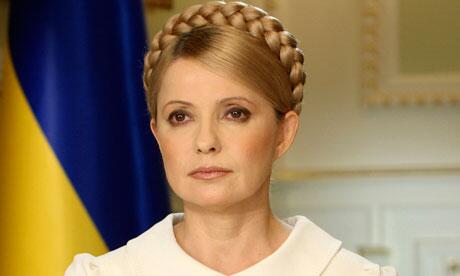 Ukraine’s Yulia Tymoshenko may be freed: A look at the jailed opposition leader

As a bloody week of street protests in Ukraine draws to a close, President Viktor Yanukovych and opposition leaders have signed a deal, and the parliament has voted on a series of measures that curb Yanukovych’s power. One of the resolutions changes a law in a way that could lead to the release of Yulia Tymoshenko.

Tymoshenko is a former two-term prime minister and founder of the Fatherland Party, the largest opposition party in Ukraine. She was sentenced to seven years in prison in August 2011 over an expensive natural gas deal she signed with Russia. Supporters have called her conviction politically motivated, and the European Union had demanded that she be released. Her picture was displayed prominently in Independence Square, the focal point of protests in Kiev.

In November, The Post’s Kathy Lally and Will Englund wrote about her significance to Ukraine’s relationship with Russia and with Europe and the United States.Inevitably, Ukraine’s problems come back to natural gas — and Yulia Tymoshenko.

In 2004, Tymoshenko rose to political glory as a leader of the Orange Revolution, when demonstrators filled Kiev’s Independence Square to protest Yanukovych’s victory in a badly flawed presidential election.

The election was redone. Yanukovych lost. Tymoshenko and others came to power but eventually lost voter confidence. In 2010, Yanukovych beat Tymo­shenko in a tight presidential race. Soon, Tymoshenko faced criminal charges for signing a gas deal with Russia while she was prime minister in 2009. Yanu­kovych described the deal as overly expensive.

Now Ukraine’s financial problems are complicated by a $1.3 billion gas debt to Russia that Yanukovych blames on Tymo­shenko.

“Ukraine suffered financial damage,” Yanukovych said in September. “The courts have to give the response.”

Freeing her would bring back one of the most polarizing figures in Ukraine’s overheated political scene. She is variously admired as an icon of democracy and detested as a self-promoting manipulator with a shady past.

Tymoshenko became a world figure during Ukraine’s Orange Revolution protests of 2004, a riveting figure both for her ringing denunciations of election fraud and her distinctive mix of peasant hair and high-fashion dresses.

She was more exciting to protesters than her Orange Revolution partner Viktor Yushchenko, who accused the government of stealing his rightful victory in presidential elections. Tymoshenko became prime minister when Yushchenko won a court-ordered election re-run.