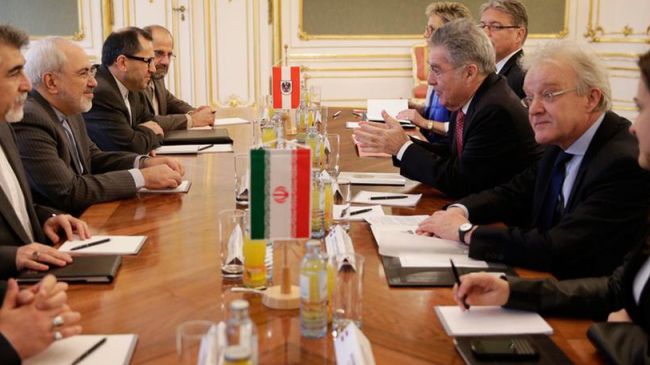 TEHRAN (FNA)- Swiss Ambassador to Tehran Giulio Hass voiced optimism about the ongoing talks between Iran and the Group 5+1 (the US, Russia, China, Britain and France plus Germany), and said these negotiations can lead to the improvement of economic ties between Tehran and Bern.

“We are optimistic about the nuclear negotiations and continuation of such meetings can yield fruit for the expansion of economic relations between the two countries,” Hass said in a meeting with Iranian Communications and Information Technology Mahmoud Vaezi in Tehran on Saturday.

On November 24, Iran and the G5+1 sealed a six-month Joint Plan of Action to lay the groundwork for the full resolution of the West’s decade-old dispute with Iran over its nuclear energy program. In exchange for Tehran’s confidence-building bid to limit certain aspects of its nuclear activities, the Sextet of world powers agreed to lift some of the existing sanctions against Tehran and continue talks with the country to settle all problems between the two sides.

Vaezi, for his part, underlined Switzerland’s special position in Europe, and said, “The Iranian statesmen have always sought mutual respect in relations with other countries.”

He also appreciated Bern for supporting Iran’s candidacy for membership in the International Telecommunication Union (ITU)’s council in the Union’s meeting in Morocco in October 2002, and called for Swiss’s continued support for Tehran in the ITU.

In December, Head of Iran-Switzerland Parliamentary Friendship Group Abbasali Mansouri Arani and Haas explored avenues for bolstering and consolidating the relations between Iran and Switzerland.

Mansouri Arani pointed to the status quo in Iran-Swiss relations, and said, “The ties between Iran and Switzerland have had many ups and downs, but Switzerland has always been seen as a very good (trade) partner of Iran.”

Mansouri Arani pointed to the Iranian parliament’s readiness to invite members of the Switzerland-Iran Parliamentary Friendship Group to Iran, and said, “… the parliaments of the two countries should make a better use of the current opportunity.”

The Swiss ambassador, for his part, pointed to the importance of the consolidation of Iran-Switzerland relations, and said, “My mission to Iran is aimed at a remarkable improvement of the relations between the two countries and I assure you that expansion of parliamentary relations between the two countries will be among my important duties because both of us have a common goal and we should cooperate for achieving that goal.”