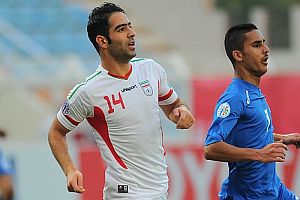 Ahvaz: Midfielder Shahab Karami is relishing the chance to show a wider Asian audience what he and his Foolad Khouzestan team-mates can achieve as the Iranian side return to the AFC Champions League next week for the first time since the club’s inaugural continental campaign in 2006.

Domestic champions in 2005, Foolad enjoyed their best performance in the Iranian league in nine seasons when they finished fourth last year, and with third-placed Sepahan also winning the Hazfi Cup, the club from Ahvaz secured a place in the AFC Champions League for only the second time.

None of the squad who exited the group stages of the AFC Champions League eight years ago remain, and as a member of the Iran U-23 squad, Karami (pictured) is part of a new generation who are looking to make their mark on the continental competition.

“It’s the first time for us to be in the AFC Champions League and we are proud to play a part in it and represent Iran. We will show everyone what we are capable of and the good level that our team can play,” said the 22-year-old Karami, who represented Iran at the AFC U-22 Championship earlier this year.

“There are lots of advantages to being a new team in the AFC Champions League. Firstly, it’s a chance for us to gain lots of experience at continental level, and secondly, nobody really knows what we are capable of, so we have a great opportunity to surprise a lot of teams.

“Our aim is to get through the group stage, we believe strongly that we can achieve this, and after that it really depends on which team we face in the knockout stage. But we are confident in ourselves and our team that we can do well.”

Teams from Iran have a strong history at the continental level with Esteghlal and PAS crowned winner of the Asian Club Championship in the past, while Sepahan and Zobahan reached the AFC Champions League final in recent years.

And last year, Esteghlal reached the semi-finals but were defeated by eventual runners-up FC Seoul from Korea Republic and the reigning Iran Pro League champions will be joined this year, as they were in the 2013 AFC Champions League, by Sepahan and Tractorsazi Tabriz.

Alongside them this time, however, will be Karami’s Foolad and with the group stage beginning next week, Hossein Faraki’s side will begin this year’s campaign against El Jaish of Qatar on Tuesday, with Uzbekistan champions Bunyodkor and debutants Al Fateh from Saudi Arabia also drawn in Group B.

“I know the Uzbekistan team, and I saw some of their players in the AFC U-22 Championship earlier this year, and we have special plans and preparations for them,” added Karami, who started all three games against Japan, Australia and Kuwait in Muscat in January as Iran narrowly missed out on qualification for the knockout stage.

“But we have never faced Al Fateh before, they are also new to the tournament like us. But, of course, in this group, whichever team plays the best deserves to win.”