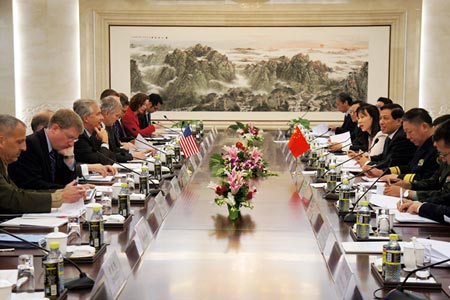 Iran knocked out of the top spot by China as US’ greatest enemy: Gallup

The US-China Strategic Security Dialogue held in Beijing on Jan. 23 this year.

China has replaced Iran and North Korea as America’s greatest enemy, according to research and consulting firm Gallup, headquartered in the US. The shift was caused by Iran’s agreement to limit its capability and China’s growing economic power.

Iraq had been considered the US’ greatest enemy since 2001. Four years later, North Korea and Iraq became the top two greatest enemies for Americans. Iran replaced them the next year and remained the greatest until this year.

Iran agreed to limit its nuclear activities last November, which has prompted several of the world’s largest nations to remove sanctions against the nation. Gallup said this could be the main factor that changed Americans’ views on Iran.

The research firm also found that the countries that Americans considered enemies have also diversified. The percentage of them that viewed North Korea as an enemy increased from 10% in 2012 to 16%. Those who considered Russia an enemy surged to 9% and Syria to 3%. Their views on China have remained relatively unchanged between 2001 and 2011 but the amount of unfavorable sentiment against the nation peaked in 2012 and declined in 2013 to 20%, the highest amongst the ranked countries.

The US and other major nations remain cautious on whether Iran will uphold its agreement to limit its nuclear capabilities given its previous reluctance. The US Senate will impose new sanctions if Iran does not curb its nuclear program.

Although Americans’ view on China are in general more positive than on Iran, they considered China’s growing economic power a threat, as serious as, or even more serious than, the military threat posed by Iran and North Korea.