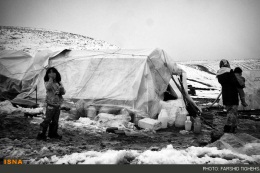 Tehran, Feb 21, IRNA – Iranˈs Red Crescent Society provided aid to some 3,600 people nationwide as heavy snow hit 12 provinces across the country 16-18 February, the spokesman for the relief and rescue organization of the body said.

Hossein Derakhshan said as many as 360 people captured in snow storms were also provided emergency shelters during the period.

Heavy snowfall this week left 25 people injured, four of whom were taken to hospital as they needed more treatment, Derakhshan said.

The aid workers also helped release some 362 vehicles trapped in the snowfall, the official added.

Derakhshan said that 253 aid workers were dispatched to the snow-stricken areas.