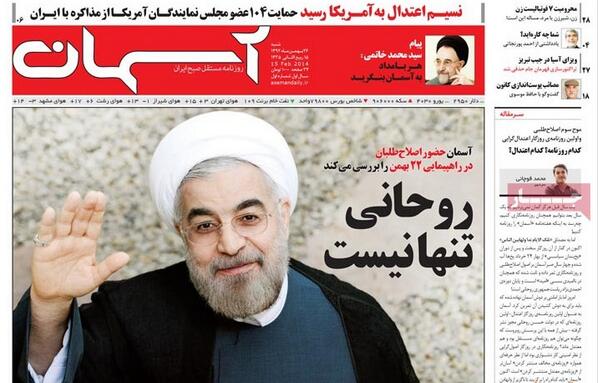 “Aseman newspaper has been banned for publishing an article that insults Islam’s sacred beliefs and articles against Islamic regulations,” the office of Tehran’s prosecutor said on its website.

“In an article run by the newspaper on Tuesday, it called ‘qesas’ inhumane,” it added in reference to the Islamic law of vengeance.

Prior to being taken in, Bozorgmehr said his newspaper had published the word “inhumane” in an “unintentional mistake”.

“I omitted the suffix inhumane in the edited version, but unfortunately the technical team sent the unedited version for publishing. Considering that our newspaper is newly launched and has a shortage of facilities, such mistakes can happen,” he told ISNA news agency.

“Some (people) want to use this incident for political mileage to eliminate a rival.”

The ban on Aseman, whose name means “sky” in Persian, comes just five days after its launch.

Bahar, another reformist newspaper, was ordered closed in October for publishing an article seen by critics as questioning the beliefs of Shiite Islam.

Mohammadreza Baqerzadeh, a cleric at a religious think tank, blamed the approach of President Hassan Rouhani’s reputedly moderate administration for such “attacks” on the law.

“Such comments and remarks made by those who do not belive in Islamic teachings are caused by the formation of a cultural atmosphere of the (new) government,” Baqerzadeh told Fars news agency.

Rouhani, who was elected in June last year, has vowed to work for more cultural liberation and social freedom.