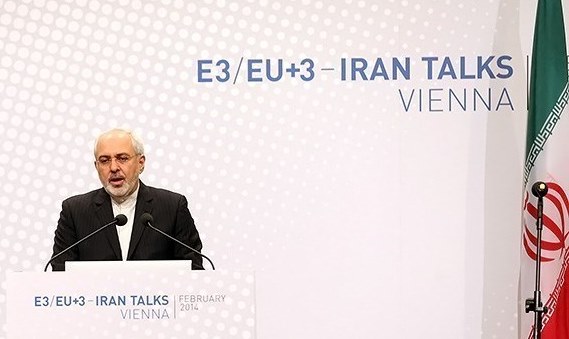 TEHRAN (Tasnim) – Iran’s Foreign Minister Mohammad Javad Zarif on Thursday said the US actions had not been helpful in trust-building among negotiating parties and have rather deepened distrust.

Speaking to a group of Iranian reporters in Vienna, Austria, after the end of three days of intensive talks between Iran and the six world powers, Zarif said the statements made in the past two months, especially by US officials, “did not help in building trust.”

Zarif’s remarks came in reaction to senior US administration officials’ remarks, including Secretary of State John Kerry, who insisted in recent months that the military option against Tehran is still on the table.

Referring to the talks between Iran and the Group 5+1 (the US, Russia, France, Britain and China plus Germany) that ended in Vienna, on Thursday, the Iranian top negotiator said US actions have negatively impacted the atmosphere of the negotiations and deepened distrust.

Zarif at the same time described the atmosphere in Vienna talks as “more positive than previously predicted.”

He called on the negotiating sides to use the historic opportunity to gain the Iranian people’s trust and avoid statements that have no use for them or the negotiations.

The two sides’ negotiating teams in the three-day talks discussed the priorities for the future negotiations and working out a framework for an ultimate and comprehensive agreement on Iran’s peaceful nuclear program.

Iran’s foreign minister further said nothing other than the nuclear issue was on the agenda in Vienna talks, adding, “We agreed on the point that only issues related to Iran’s nuclear program are negotiable.”