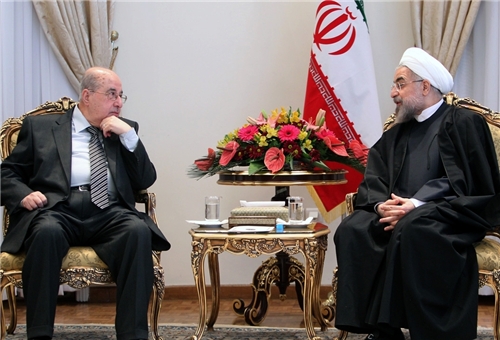 TEHRAN (FNA)- Iranian President Hassan Rouhani, in a meeting with Palestinian Parliament Speaker Salim Zanoun on Wednesday, renewed support of the Iranian government and nation for the oppressed people of Palestine, and called for the liberation of the Holy Quds (Jerusalem) from the yoke of Israel.

During the meeting which was held on the sidelines of the 9th Meeting of the Organization of the Islamic Conference (OIC) Inter-Parliamentary Union (IPU) in Tehran on Wednesday, President Rouhani said, “One of the wishes of the Iranian nation is liberation of the Holy Quds.”

The Iranian president regretted that the occupation of the Holy Quds still continues, and hoped that “the Palestinian nation and the entire Muslim world will find a serious solution to this occupation through unity and integrity”.

Zanoun, for his part, praised the Iranian nation as a great nation, and said, “I hope that during your presidency you will see a great development in the Muslim world, specially with regard to Palestine.”

Israel has long been pursuing a Judaization plot to change the identity of the region. Ever since the 1967 Six-Day War, Israel has been increasingly exercising its Judaization scenario all across the occupied lands in Palestine and the Golan Heights (in Syria).

Last year, Israel’s inner cabinet decided to speed up construction of homes for Jews in Arab East Quds and in other nearby settlements to punish the Palestinians for winning membership in the UN cultural agency, UNESCO.

Since then, Israel has issued announcements for the construction of 2,057 new homes in Arab East Quds and 1,241 in the West Bank, official figures show.

At least 200,000 Israelis live in a dozen settlement neighborhoods in East Quds, which was captured by Israel in 1967 and annexed in an aggressive move never recognized internationally.