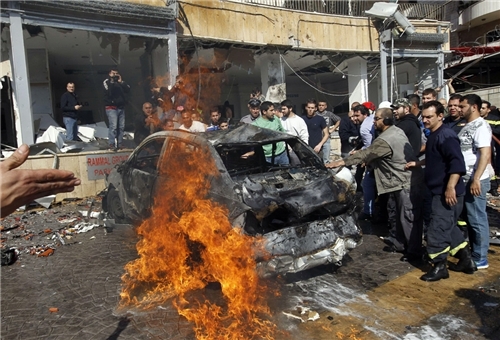 During the conversation on Wednesday, Zarif condemned the blasts outside several Iranian institutes and a charity institute in Beirut, Lebanon.

Two explosions hit an area near the Kuwaiti embassy and the Iranian Cultural Chancellery in Beirut on Wednesday morning.

Later in the day, the Iranian embassy underlined that all of its staff members are safe and sound.

According to the initial reports, five people have been killed and 38 others wounded.

The Abdullah Izzam Brigade has claimed responsibility for the blasts, saying it planned to target the Iranian cultural center.

In a message on its Twitter account, the terrorist group said, “In a little while, God willing, there will be important announcements on the attack of the Iranian cultural centre in Beirut by your brothers in the Abdullah Azzam Brigades, from the Hussein Bin Ali cell.”

The same group targeted the Iranian embassy in Beirut in November and killed scores of people, including the Iranian cultural attaché in Lebanon, in twin bomb blasts.

The November terrorist attacks targeted just 10 meters away from Iranian embassy in Beirut’s Southern neighborhood of Jinah, inflicting much damage to the compound.

Iran’s cultural attaché in Beirut Ebrahim Ansari, along with 24 others including several embassy guards, was killed in the attack.

Then a month later in December, the Lebanese security forces said they have arrested al-Majed, the Saudi ringleader of Abdullah Izzam Brigade which had claimed responsibility for the November 19 bombings near the Iranian embassy.

Later, a Lebanese army General, who spoke on the conditions of anonymity in line with regulations, said Al-Majed died in custody in Lebanon. The General said al-Majed died after suffering kidney failure.

Political analysts believe that the supporters and financers of Abdullah Izzam terrorist group have killed al-Majed for the fear of the possible revelations he could make against the Saudi Takfiri groups and his masters.

Also, other observers say that the Lebanese security forces had started al-Majed’s interrogation before his death, but refrained from disclosing their information upon Riyadh’s request.

Al-Majed, a Saudi citizen was detained in Lebanon in December and had been held at a secret location. Al-Majed was announced as leader of the Brigades in 2012.

In 2009, Lebanon sentenced al-Majed in absentia to life in prison for belonging to a different extremist group, the Al-Qaeda-inspired Fatah al-Islam.