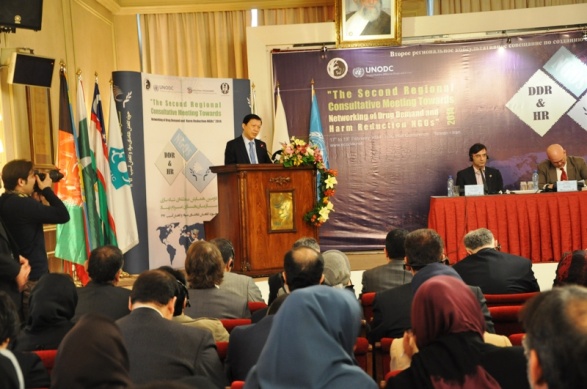 Mr. Leik Boonwaat, UNODC Representative in I. R. of Iran

Countries of the region – including Afghanistan, Iran, Pakistan and the Central Asian states are currently working to finalize the constitution for a network of drug demand and harm reduction NGOs. This will strengthen their ability to collaborate and exchange best practices to address the problems of drug abuse and HIV prevention.

The event was organized by Drug Control Head Quarters, the Iranian Non Governmental organization “Rebirth Society” and the United Nations Office on Drugs and Crime in Iran.

In the past several years, Iran has undertaken ground-breaking work in drug demand reduction and harm reduction with support from UNODC. Currently, in Iran, there are some 200,000 users on Oral Substitution (Methadone) and 60,000 injecting drug users on Needle-Syringe programmes.

The three-day event, kicked off on 17 February in Tehran and was inaugurated with the presence of Minister of Interior of the Islamic Republic of Iran, representatives of the diplomatic corps, international organizations, NGOs from countries in the region, UN agencies and the UN Resident Coordinator, and UNODC Iran Representative.

In the opening ceremony, Mr. Gary Lewis, the UN Resident Coordinator, welcomed the participants in Farsi firstly and then started to address his speech on the issues of the meeting.

Mr. Lewis mentioned that Iran is an extremely appropriate venue for hosting such a “Regional consultative meeting towards networking of drug demand and harm reduction NGOs”, because Iran has – for many years – contributed to drug control in two important ways. First it has played a vital role in interdicting drugs trafficked westwards – accounting for one-third of all heroin seized in the world and 80 per cent of opium seized. Secondly, Iran has achieved great success in delivering evidence-based drug demand reduction and harm reduction interventions during the past several years.

Mr. Lewis added that Iran happens to be the only country in the world to establish “drug prevention and control” as a distinct programme pillar within the UN Development Assistance Framework which governs all UN development work in the country.

Minister of Interior H.E. Mr Abdolreza Rahmani Fazli, spoke of the importance which the Government places on the work of NGOs in the addressing drug problems. He said that the Government valued the support provided by UNODC, Iranian NGOs and the Drug Control Headquarters to this significant event.

Mr. Boonwaat pointed out that NGOs in Iran are working in all areas of demand reduction and HIV control. He added: “In the last 15 years, the Islamic Republic of Iran has attained groundbreaking achievements in programmes to contain the problems of HIV and drugs in the various areas of prevention, treatment and care in communities and prisons.” Mr. Boonwaat said that millions of Iranians have taken part in drug prevention programmes and hundreds of thousands of Iranians suffering from drug use have access to drug treatment and harm reduction services.

The purpose of the Regional Consultative Meeting towards Networking of Drug Demand and Harm Reduction NGOs is to support the formal networking of the regional non-governmental organizations active in the field of drug demand reduction and harm reduction.

NGO representatives from Afghanistan, Iran, Kazakhstan, Kyrgyz Republic, Pakistan, Tajikistan, Turkmenistan and Uzbekistan as well as NGO networks in Austria and the United Kingdom are participating in the three-day seminar at the Iranian Centre for International Conferences.