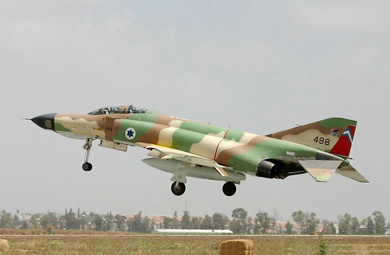 Israeli arms dealers tried to send spare parts for F-4 Phantom aircraft via Greece to Iran in violation of an arms embargo, according to a secret probe by the US government agency Homeland Security Investigations (HSI) carried out in cooperation with the drugs and weapons unit of Greece’s Financial Crimes Squad (SDOE).

According to the probe, which Kathimerini has had access to, the operation was carried out in two phases – one in December 2012 and the second in April 2013. In both cases, officials traced containers packed with the F-4 parts on Greek territory. The cargo had been sent by courier from the Israeli town of Binyamina-Giv’at Ada and had been destined for Iran, which has a large fleet of F-4 aircraft, via a Greek company registered under the name Tassos Karras SA in Votanikos, near central Athens. SDOE officials established that the firm was a ghost company, while the company’s contact number was found to belong to a British national residing in Thessaloniki who could not be located.

According to HSI memos, the cargo appears to have been sent by arms dealers based in Israel, seeking to supply Iran in contravention of an arms embargo, and using Greece as a transit nation.

Last November, an Athens court ruled against the confiscation of the consignments and ordered that they be delivered to US authorities.

The US imposed sanctions against Iran in 1979, after a revolution which overthrew the Shah, extending them in 1995 to include firms dealing with the Iranian government. Several governments and multinationals have since followed suit.